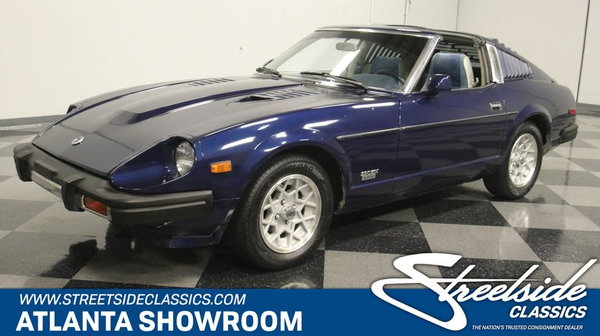 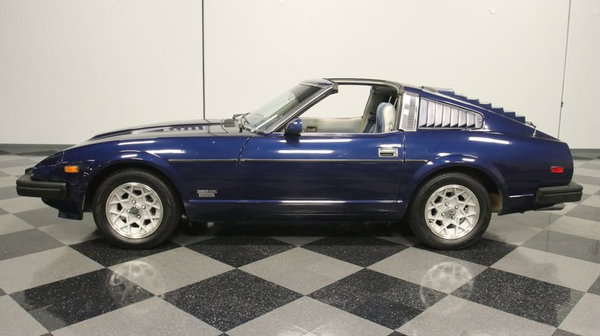 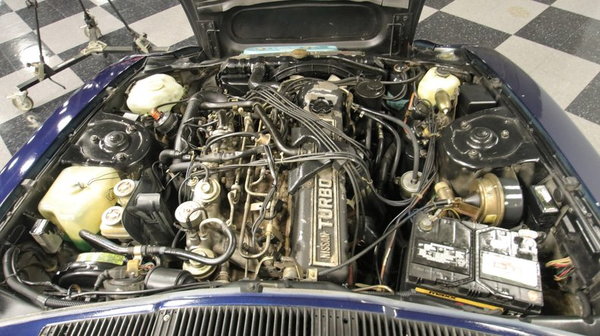 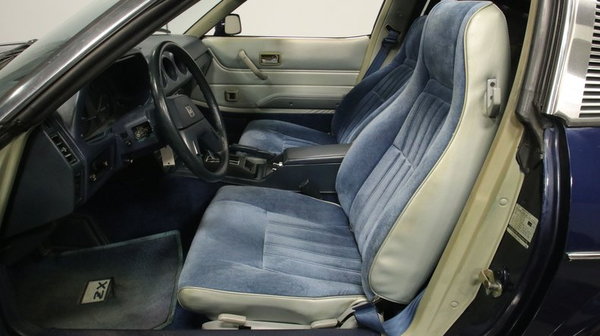 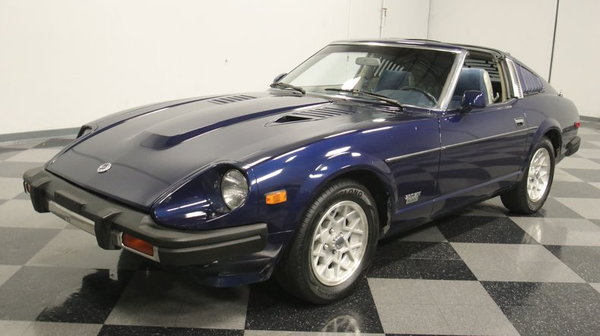 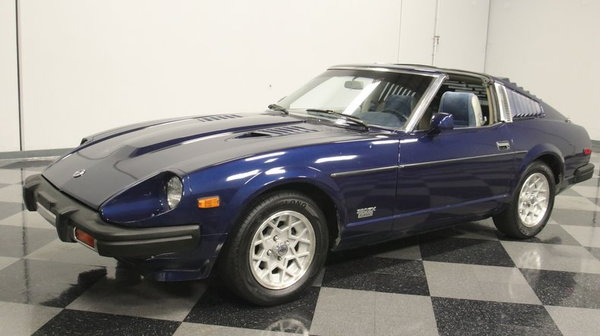 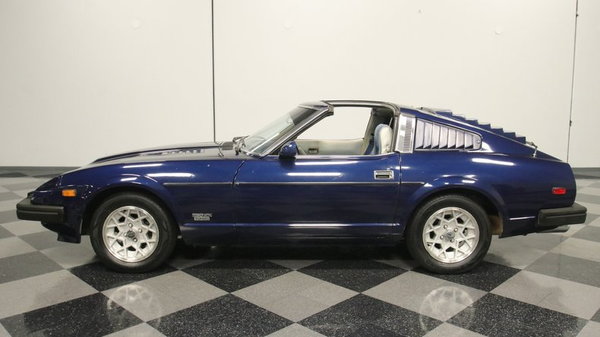 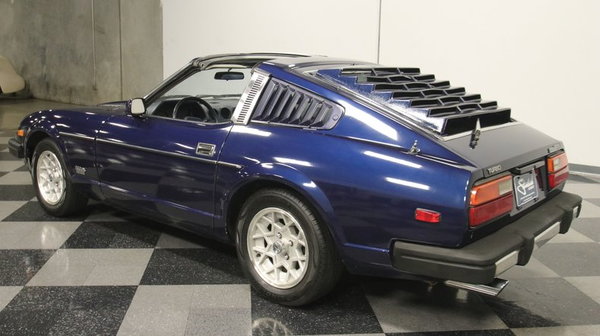 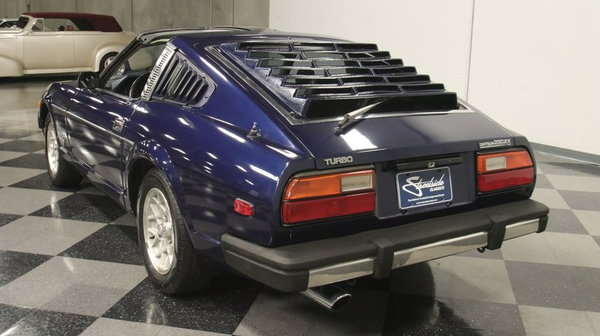 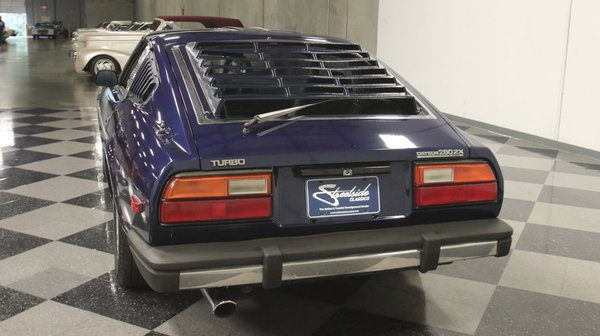 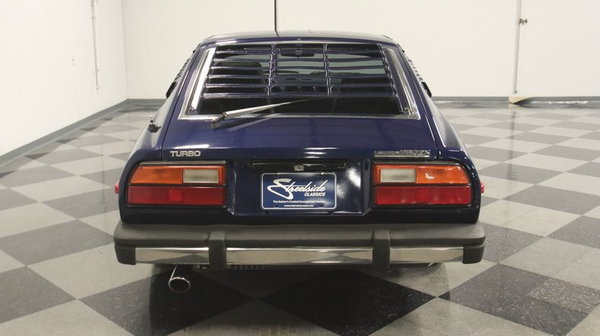 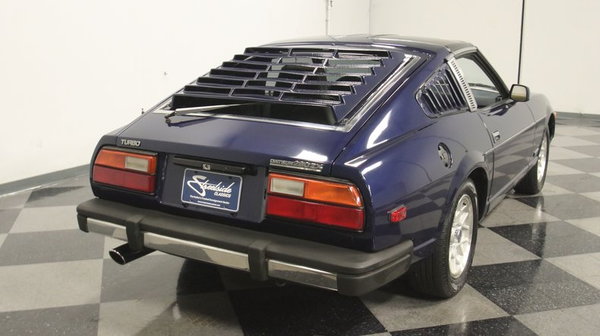 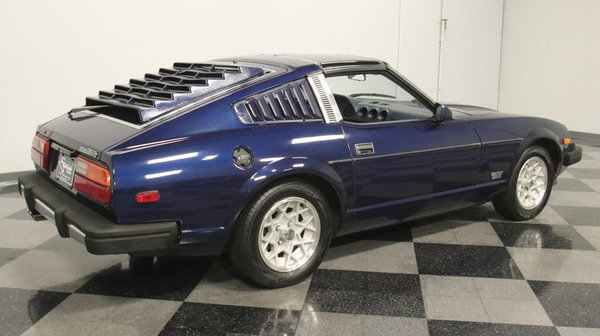 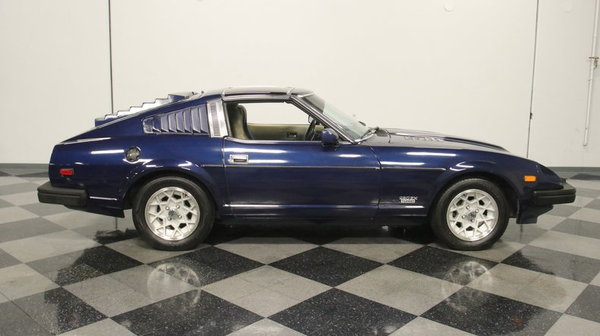 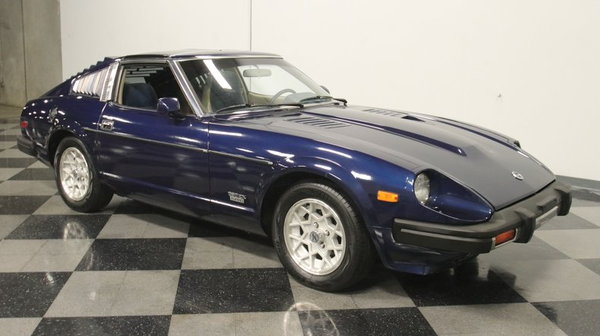 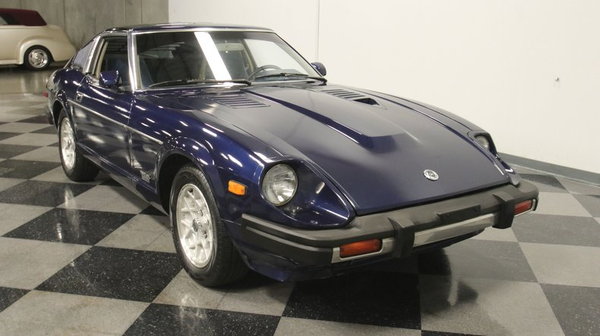 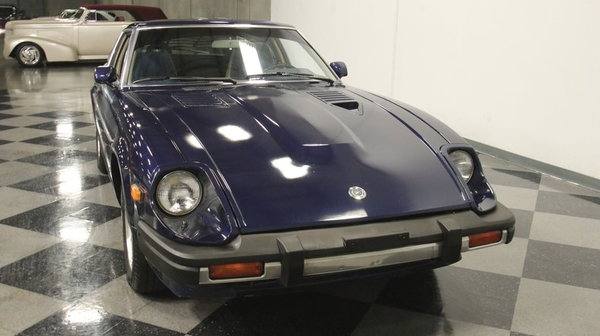 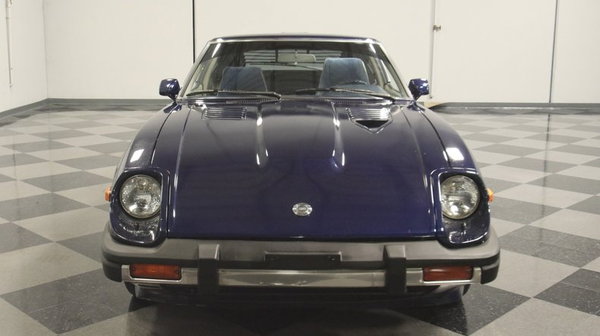 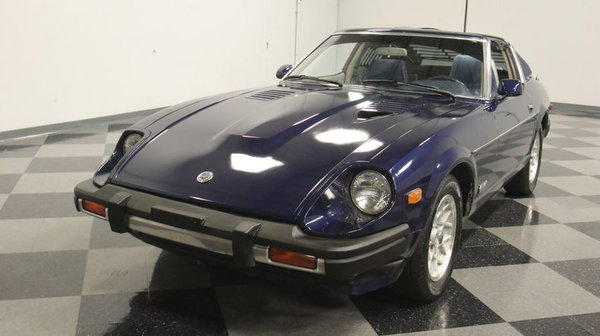 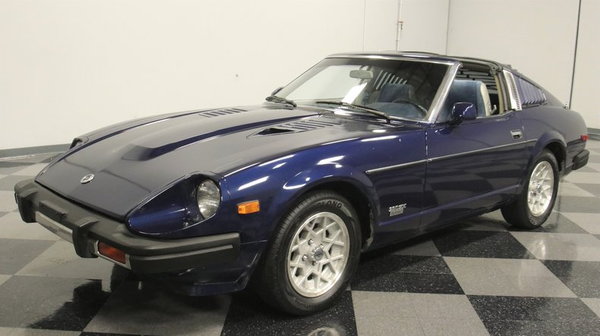 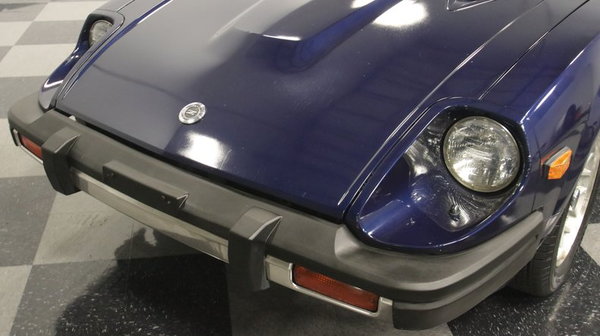 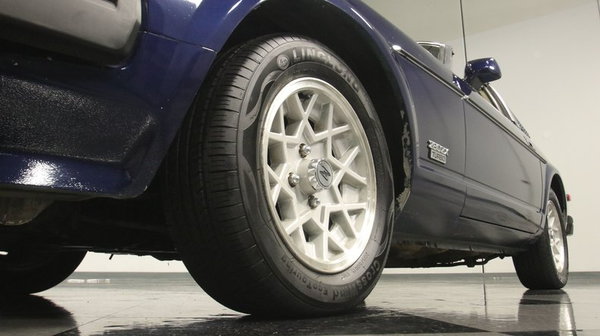 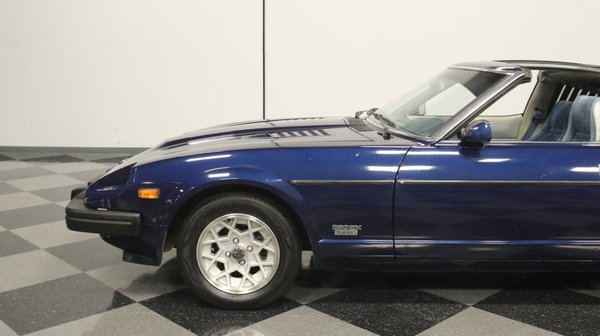 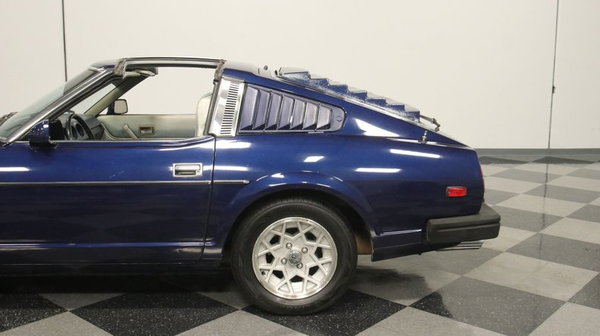 In the early '80s, when domestic automakers were wondering how to make a high performance V8 engines work with draconian emissions controls, import cars like this dialed-in 1981 Datsun 280ZX Turbo delivered amazing performance and killer styling on the cheap. And while the familial resemblance is instantly recognizable, the 280ZX Turbo was a big step forward for the big swinging Japanese automaker, delivering perhaps the biggest bang-for-the-buck on the market in the early 1980s. Datsun Z's have soared in value the last 5 years, and the ZX's are growing exponentially close behind them. So read quickly, or risk missing what might be your last chance on the value rollercoaster shooting up toward the sky...
This incredibly well preserved 280ZX Turbo has had only four conscientious owners (all of whom lived in sunny Georgia), and it's obvious that they loved this car and treated it like an extended member of the family. With that turbo motor and slick Midnight Blue paint, it's arguably the most desirable of all the 2nd generation Z cars. Re-sprayed in the early 2000s at a reputable shop just down the street from us, the finish is of strong driver-quality, just like you want in a car you plan on driving on the way to the car show. The finish looks very impressive given the 20 years that have passed since it was applied, and because the materials were modern and more durable than what you'd find coming out of Japan in 1980, it will hold up and look this good for many, many years to come. And with the laser-straight sheetmetal and bodywork underneath, there's no question that this car has been very well maintained and babied since it was new. There's no evidence of major damage or any large repairs, and the car overall has a lovely shine and deep luster that is a hallmark of all genuinely well-preserved original cars. Sure, she's no longer a perfect 'Fairlady', but she's much more than just a fair lady. The doors open and close properly and line up straight, the hatch fits tightly without any squeaks or rattles, and the big hood with functional NACA ducts latches with a gentle push instead of a slam. Trim pieces are in equally good shape with no signs of fading from exposure to the sun, the removable louvers out back are an awesome, period-perfect touch we all love, and all the brightwork (what little there is) remains bright and shiny.
The high-tech (for the time) blue-and-gray cloth interior remains in very good condition throughout, from the carpets which show only light use, to the seats that show only modest comfort marks in the high-wear areas, and even the headliner and T-tops that are still in remarkable great shape. The foam underneath remains comfortable and firm, and doesn't feel brittle as it does on many cars of this vintage, and the dash is remarkably stress and crack-free, which is quite an achievement if you're familiar with Japanese interior plastics from the 1980s. The gauges are all big, round, and legible, with auxiliary gauges in their own separate round pods in the middle of the dash, a Z-car hallmark that continues to this day, and even the original quartz clock all the way to the right is still fully functional. Surprisingly, the original AM/FM/Cassette is still in place and powers all the original speakers inside the cabin, so when the T-Tops are off, open-air cruising with tunes dialed-up is definitely on the menu. Options include factory A/C, power windows/locks/mirrors/antenna, cruise control, and the T-tops complete with original covers and sunscreens are a very desirable feature on these cars. And you'll also note that this 280ZX Turbo remains a true 2-seater, and not the less desirable 2+2 that was part of the same 1979 redesign, so you get loads of storage space under the hatch.
The engine is a smooth-revving and great-sounding turbocharged 2.8 liter L28ET inline-six that is directly descended from the engines that powered the famous early Z cars. The horsepower wars were apparently back in a modest way, so Nissan engineers bolted a turbocharger to the silky smooth six to boost horsepower to 180, with 203 lb-ft of asphalt-chewing torque that makes this lightweight coupe delight to drive. Performance for the time was impressive, as only the Porsche 911 and BMW M1 were faster that year, and surprisingly enough there's very little turbo lag to account for. The engine bay shows signs of regular maintenance throughout, but is otherwise highly original and untouched. There are no questionable modifications, no signs of damage or previous abuse, and everything is in place as the factory intended. The same holds true underneath, where it's clean and solid, with no signs of structural rust or damage thanks to an easy life spent in the warm American South. The 3-speed Jatco automatic transmission shifts easily, while the all-independent suspension, responsive power steering, and power 4-wheel disc brakes deliver high performance without a penalty. It rides on a set of stock Z 'snowflake' alloy wheels wearing 205/60/15 radial tires that finish off the factory look.
Rising values have shown us that the day of the Z car as a legitimate collectable is upon us, and the ZX is the next big thing that's ready to skyrocket in value. With a stack of maintenance receipts, original title documentation, and the original owner's manual, this gorgeous 280ZX offers the ideal combination of excellent preservation and ready usability, and the result is a car you can drive without guilt and show with pride. Call today!
View Full Description