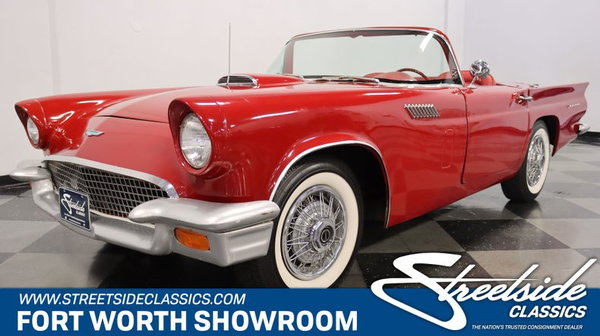 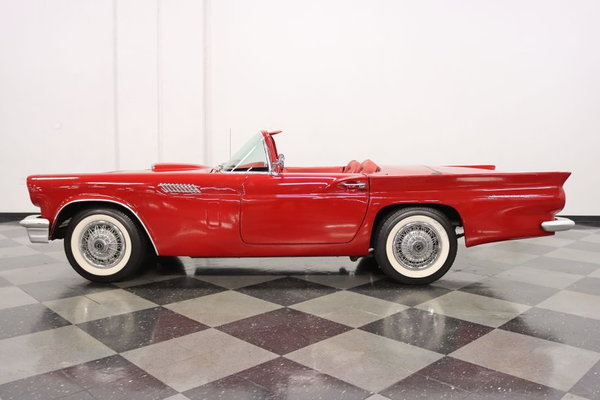 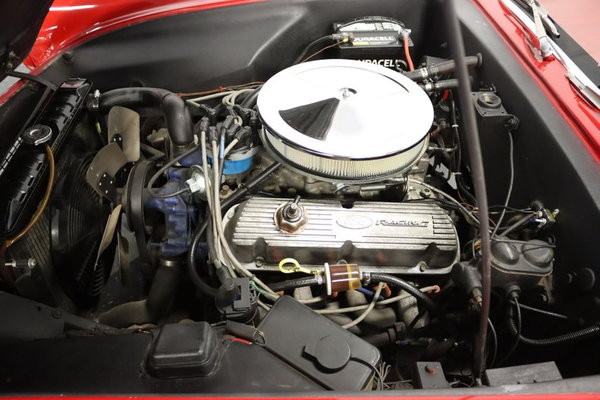 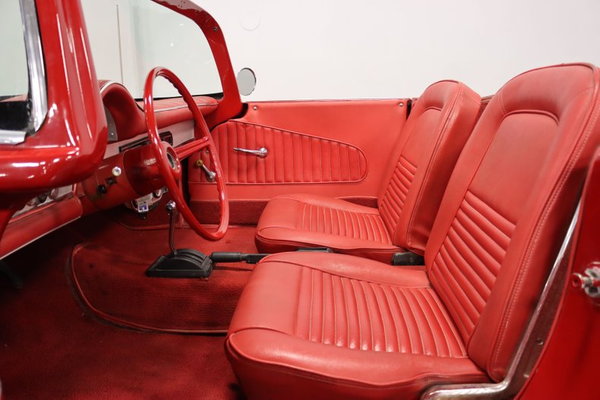 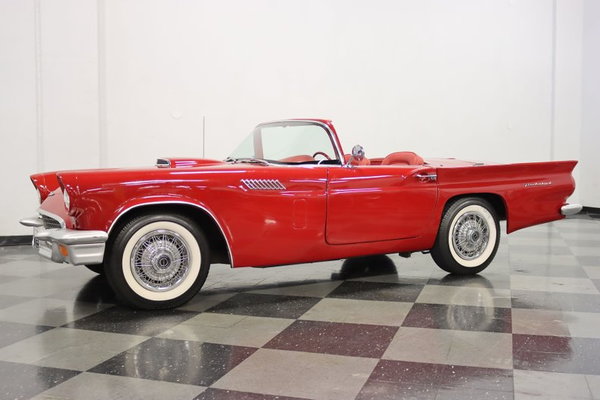 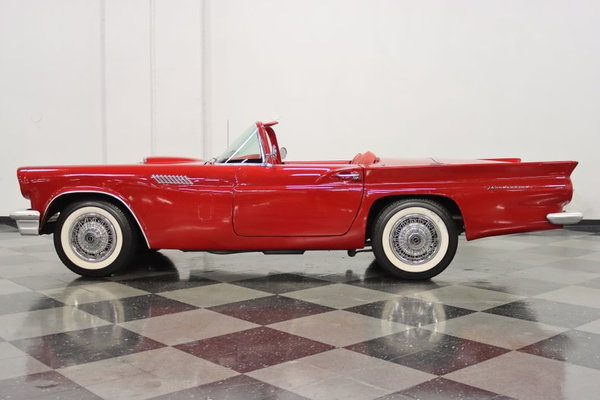 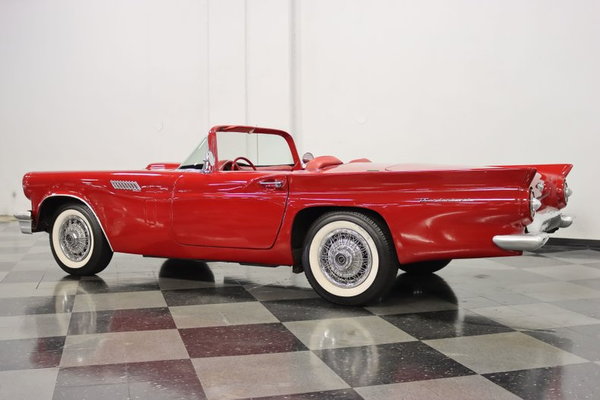 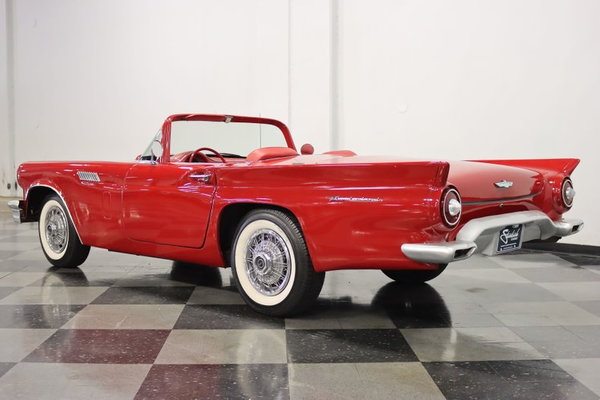 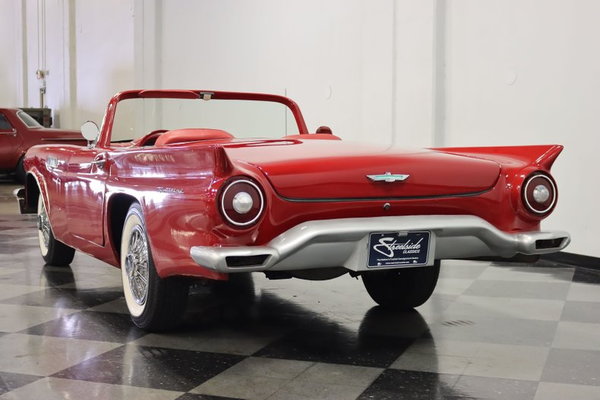 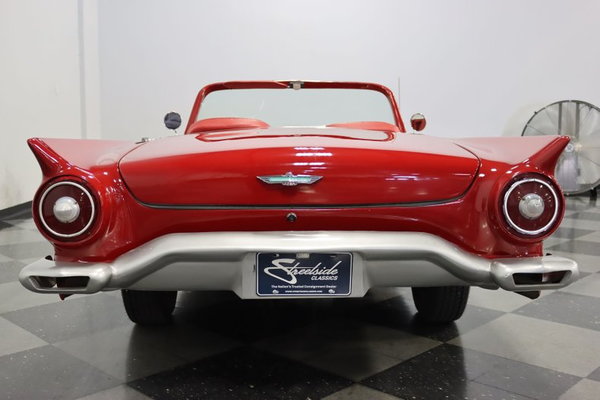 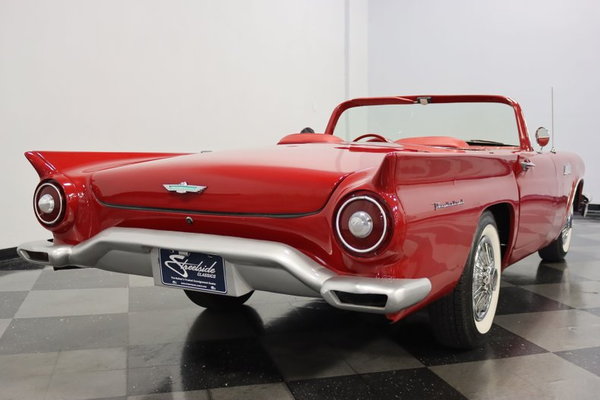 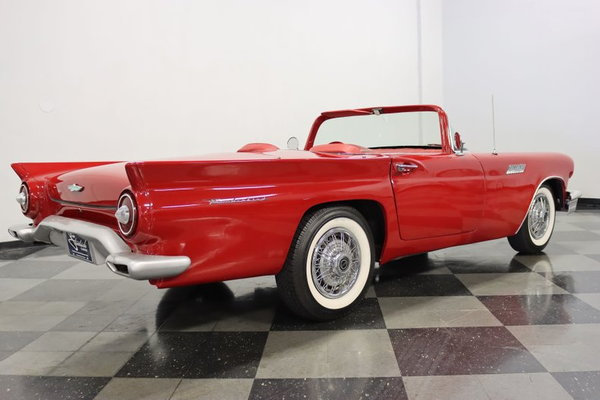 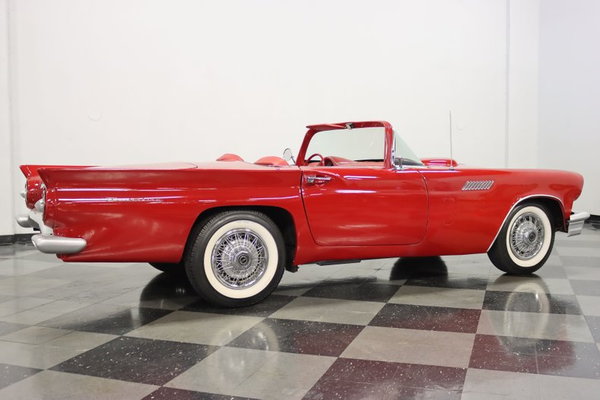 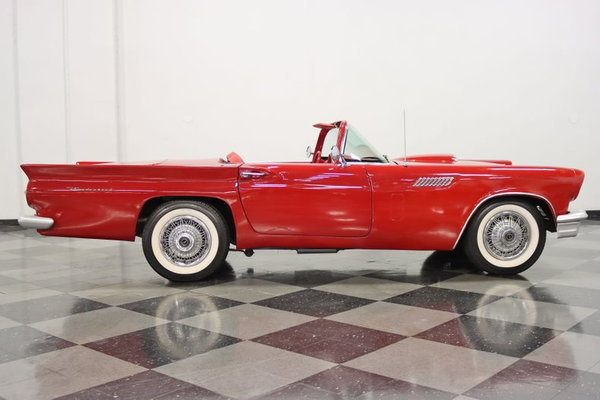 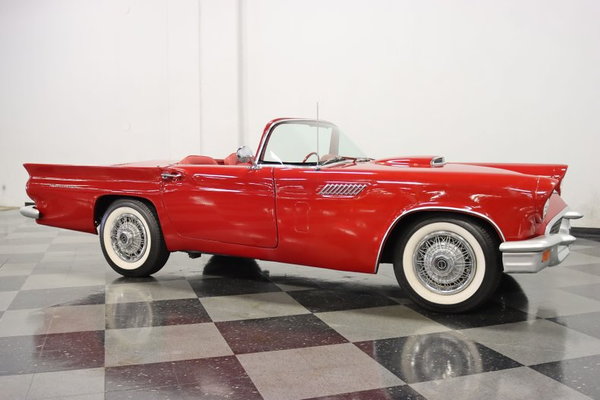 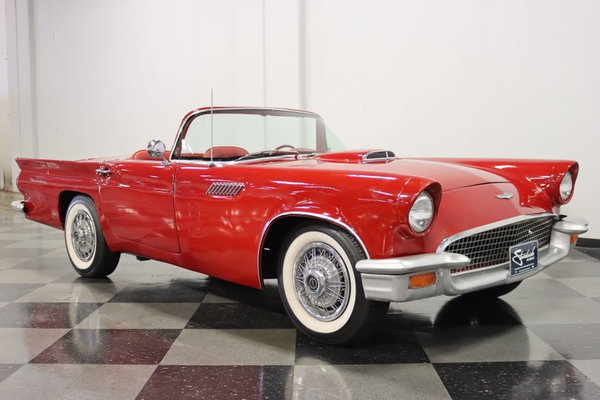 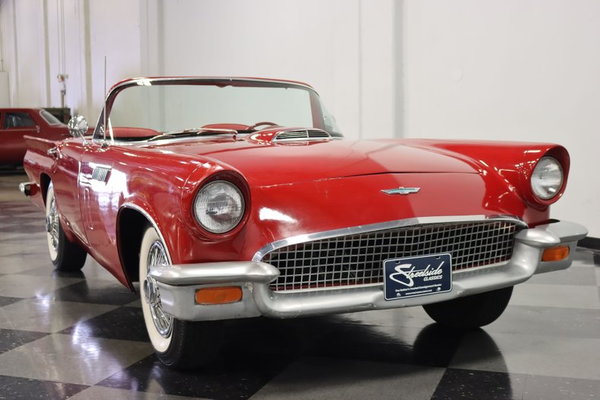 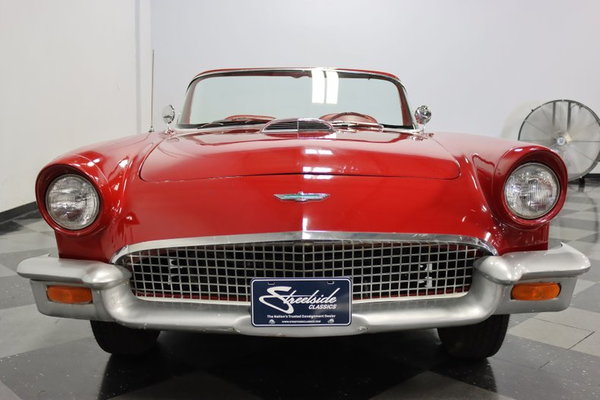 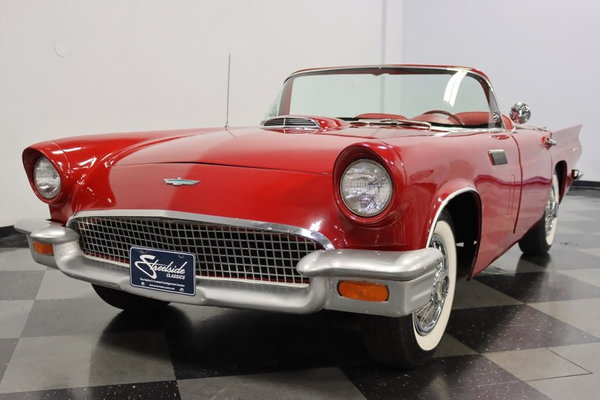 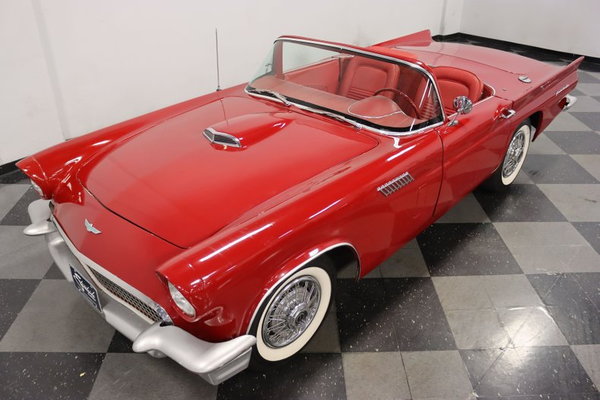 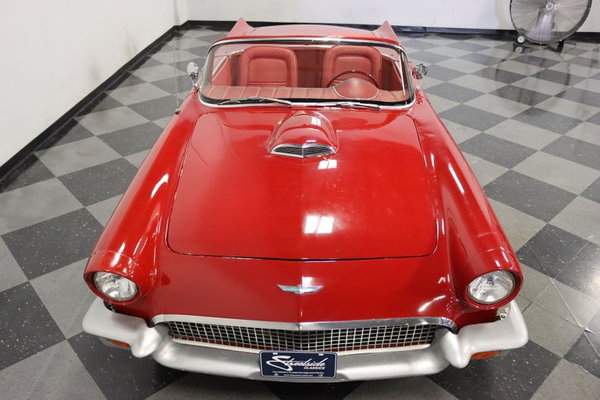 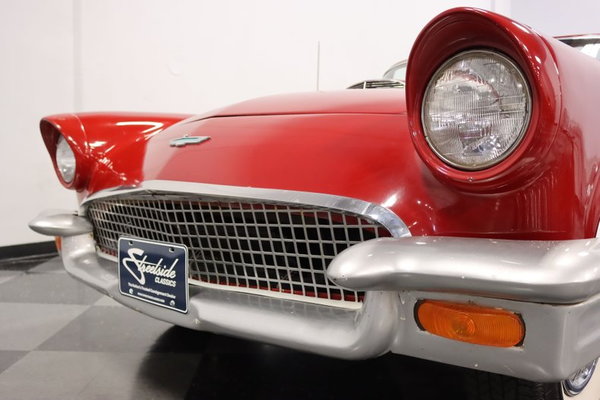 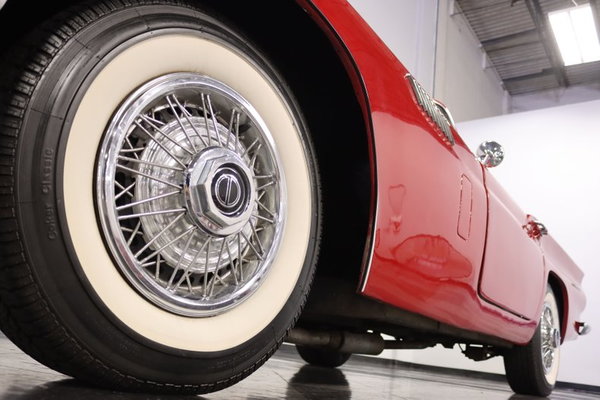 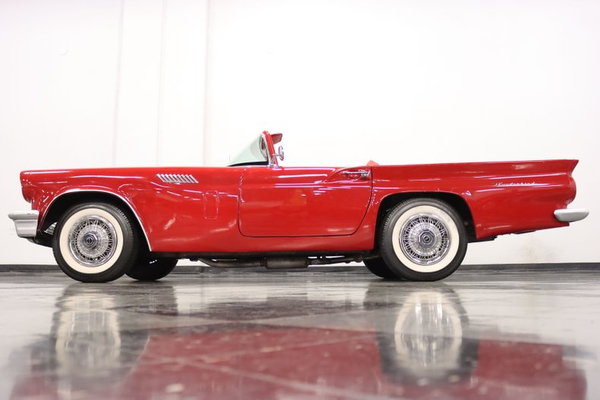 $19,995
Get Financing >
1568 miles
Ad Number: 184351774
Report this ad
Fort Worth, TX, US
No trades accepted
Streetside Classics-Dallas/Fort Worth (Business Seller) RJ Storefront
Share
Save
Msg.
Call
Item description
If it looks like a 'Bird, sounds like a 'Bird, and is even badged as a 'Bird, it must be a real Thunderbird, right? Not necessarily, back in the '70s and '80s several companies popped up and built replicas so people could afford the next-best-thing. Nicely built "Baby Bird" facsimiles like this 1957 Ford Thunderbird Replica from Prestige Classics Manufacturing represented one of the better tributes that money could buy, with a tough, durable fiberglass body, comfy interior, and an upgraded 302 V8/3-speed automatic drivetrain. Same timeless good looks but with more power, better handling, and the reliability of a more modern drivetrain, all for a fraction of the price of real T-Bird. Sign me up!

Built in 1975, this is a very convincing replica. The fiberglass bodywork nails the Thunderbird look with the wide grille, functional hood scoop, and small fins on the rear fenders; heck, it's even got cowl vents! Some folks might think the lack of fender skirts gives it away, but the truth is that skirts were optional on the original 'Birds, although 95% of buyers opted to have them. Finish quality on the body is quite good and it fits together fairly nicely, and the bright red finish certainly looks right on a 2-seat 'Bird. The paint is definitely showing some age and some prep issues, some of which could be remedied with a professional wet sand and buff, but at speed nobody's going to notice and with the mechanical upgrades underneath, you'll be having too much fun driving the thing to worry about it. The bumpers are silver, instead of chrome, which give the car away the most, but the front grille, brightwork accents, and spoke wheels all play the part the right way.

At first glance, the interior looks a bit traditional, but then you notice those are 1st-generation Ford Mustang buckets wrapped in good looking red seat covers. The dash is a reasonable facsimile of the original, with all the gauges grouped ahead of the driver in a neat machine-turned panel, and the steering wheel and floor shifter for the automatic transmission are slightly different than what you'd get in 1957, but it all just works. A trio of auxiliary gauges under the dash monitor the powerful small block, and there's a modern AM/FM/CD stereo, which is a thoughtful update on a car that dates back three decades. And although it looks like this replica was originally built with A/C (judging by the controls in the dash), the components have been removed, though that may not be that big of a deal in an open-air cruiser like this. There's some evidence of light use, but that also means this one is totally sorted out and ready to enjoy without the usual foibles of an assembled car. Red door panels are neatly stitched, as are the red carpets on the floors, and the trunk is simple and houses a full-size spare.

The engine is a reliable Ford 5.0 liter V8 (aka the 302 V8) borrowed from a 1975 Ford Granada. The small block comes topped with a Holley 4-barrel carburetor and an aluminum intake, so it's easy to maintain and retains the flavor of 1957, and there's plenty of power on top for this lightweight Faux Bird. Of course, you also get things like a set of long-tube headers, Ford Racing valve covers, and a powerful alternator instead of a generator, so the engine bay is way more performance based than anything from 1957. Front disc brakes and rack-and-pinion steering are included, so this Thunderbird rides, handles, stops, and steers better than any stock Baby Bird, and the custom chassis supports the body on heavy-duty shocks and springs. The soundtrack is much improved as well, with those block-hugging headers feeding into a Flowmaster dual exhaust system with turn-downs just beyond the rear axle (the exhaust openings in the rear bumper are just for show). Wired wheels are the perfect 'chef's kiss' on this build, and they come wrapped in 205/75/14 Coker Classic wide whitewall radials with plenty of grip.

Finance
LightStream
What's the smartest way to get the car you want? Take control of the process. With LightStream and your good credit, you can! The Low Rate You Deserve: Many lenders claim to have low rates. How many will beat the lowest qualifying rate you can find, from any lender? LightStream will, because they are truly confident that their rates are always competitive. It's Your Choice: You can choose any car you want, regardless of make, model, year, mileage, or loan-to-value, and act as a cash buyer, with funds deposited directly into your account. You even choose the repayment terms of your loan. Two Auto Loan Solutions - Unsecured or Secured: When you have excellent credit, you have earned the right to borrow without having to have a lien on your vehicle. For those with good credit, LightStream may offer you a secured auto loan. With either loan solution, you'll have a simple, streamlined loan process from start to finish, and exceptional customer service. Your Satisfaction is Guaranteed: LightStream's simple application takes just minutes to complete. They respond to customers quickly during business hours, provide a virtually paperless experience, and back their service with their exclusive Loan Experience Guarantee. All loans are subject to credit approval by LightStream. Your credit profile will determine whether your loan will be unsecured or secured. Conditions and limitations apply. Advertised rates and terms are subject to change without notice. © 2017 SunTrust Banks, Inc. All rights reserved. LightStream and SunTrust are federally registered service marks of SunTrust Banks, Inc. All other trademarks are the property of their respective owners. Lending services provided by SunTrust Bank, member FDIC.

Insurance
Grundy
Grundy Insurance has specialized in protecting collector cars since 1947! Specifically designed for collector vehicles, Grundy insurance saves you at least 50% of the cost of regular car insurance while delivering better protection! With Grundy Agreed Value Insurance you get 100% of your car's value in the event of a total loss. Grundy's coverage is never reduced - not in 1 year, not in 50 years, not ever - for as long as you maintain your policy!

Shipping
Thrifty Auto Shipping
If affordable auto shipping is what you're looking for, Thrifty Auto Shipping is the perfect car shipping & auto transport service to fulfill your needs. Whatever the job entails - business relocation, car dealership delivery, cross-country moves, etc. we make sure all vehicles are delivered when promised and in the exact condition as given to us. As one of the leading auto moving companies in the nation, we ensure the drivers we use are above all insured, reliable and their equipment is up to date. Once your vehicle is loaded it is covered with full coverage up to $80,000 dollars. This is peace of mind for you and your family. Rest assured our experienced drivers will transport your vehicle in the safest manner possible to prevent damage during transport... We also guarantee our clients will receive the highest quality of customer service, including professional and timely responses to all inquiries. Entrust the safety of your vehicle to Thrifty Auto Shipping, a family-owned auto transport company you can place your confidence in.

Storage
SpareFoot Storage
SpareFoot is the largest online marketplace for storage, making it easier to compare your options, find the best deals and prices and place a free online reservation, no credit card required. Self-storage facilities across the country have stepped up to meet the storage needs of car owners by offering safe, monitored space for you to keep your car. Whether you simply need a place to park it outside for a couple of weeks or are looking for a second garage to store your classic car, a self-storage facility near you may have exactly what you need.
View All Resources
Sponsored Ad
Interesting reads
See More

Classic Cars
Is the ’73 Plymouth ‘Cuda the Most MOPAR Car Ever?

Classic Cars
Is the ’73 Plymouth ‘Cuda the Most MOPAR Car Ever?

Designated trademarks and brands are the property of their respective owners. Use of this Web site constitutes acceptance of the RacingJunk.com