What is a dragster?
The dragster is a special body/style of race car which competes in the Top Fuel and Top Alcohol classes of amateur and professional drag racing. The dragster is characterized by a long nose (the Top Fuel car is usually 25 feet long, nose to tail), with an open wheel format, a large power plant, and runs on a mix of methanol and nitro methane. Top Fuel dragsters run in the NHRA Mello Yello championship, while Top Alcohol vehicles (which only make about half the power of their Top Fuel cousins) run in the sportsman division. They feature blown engines, and run on methanol exclusively.

Top Fuel dragsters are the fastest-accelerating race cars in the world, and reach up to 335 mph over a 1000 feet. They are powered by a version of the 500-cu in Chrysler Hemi engines, and can cover the 1000 foot strip in 3.7 seconds.

Allstar New/Old 270in Dragster
This dragster was built a few years ago But has never had a motor in it Check out the workmanship that went into this car Chassis - Powder coated... 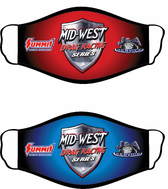 MWDRS Mask
If you have to wear a face covering, you might as well look good and fast doing it. Besides looking really good, they are very breathable and...