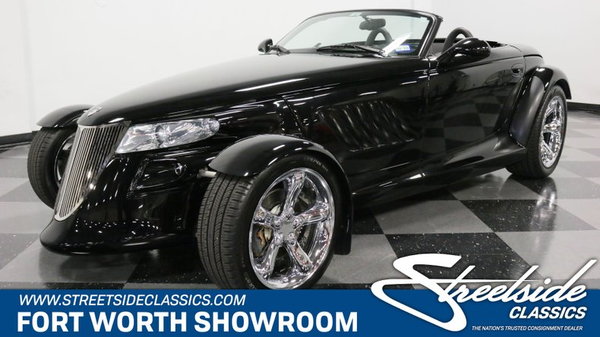 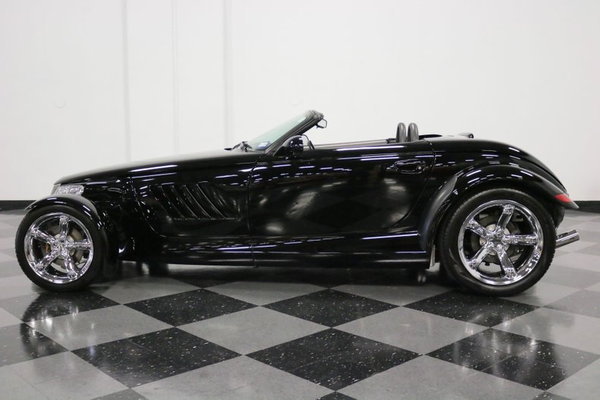 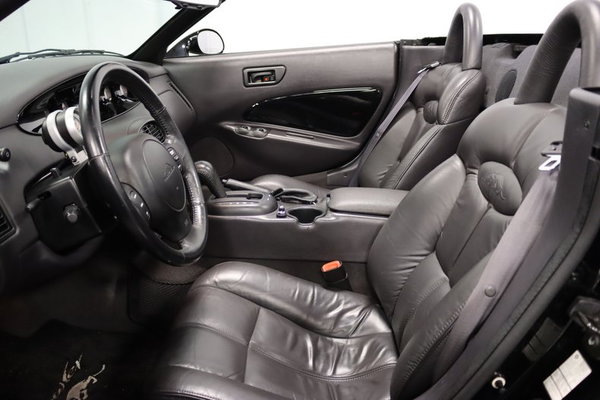 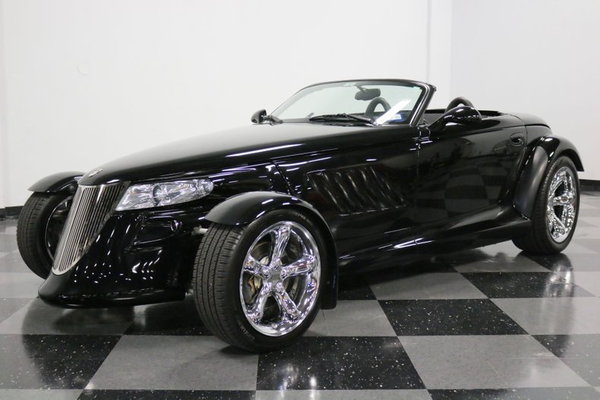 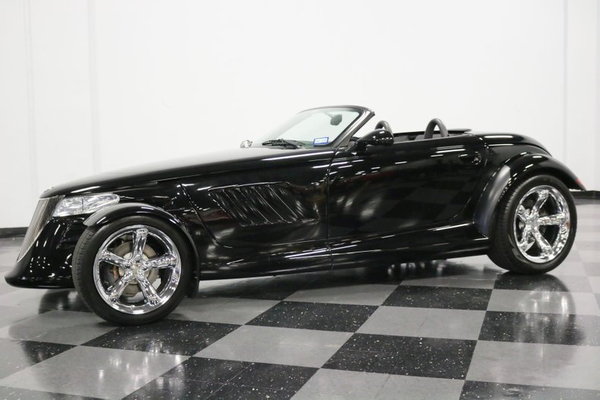 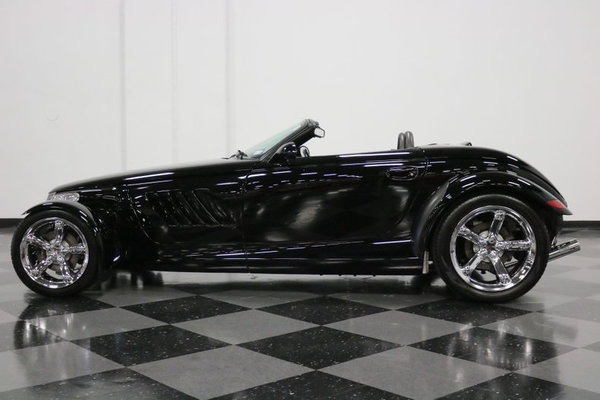 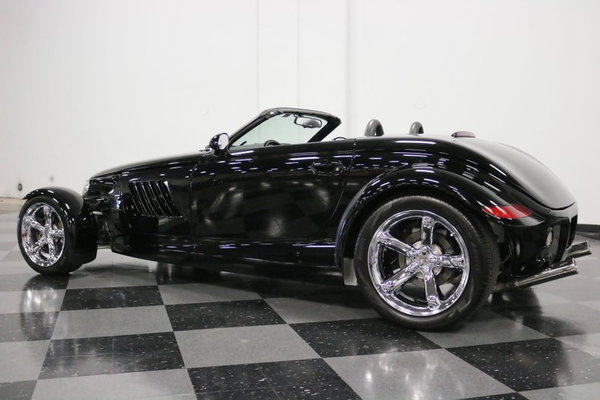 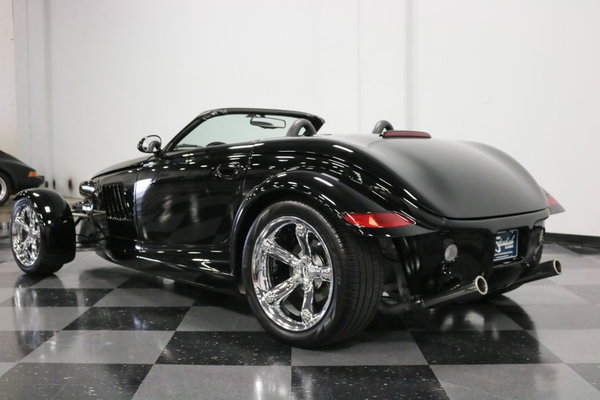 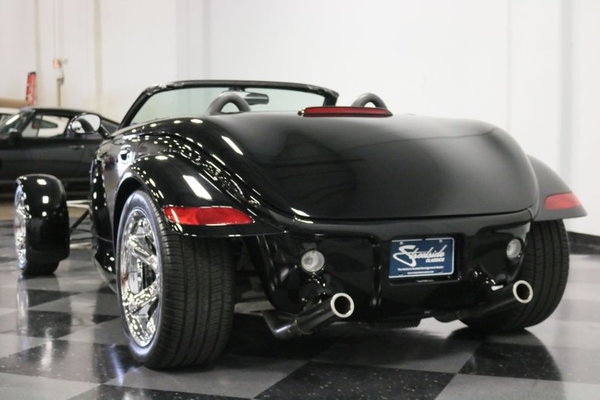 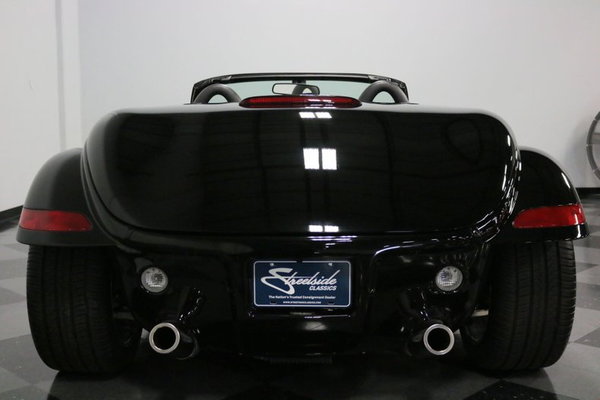 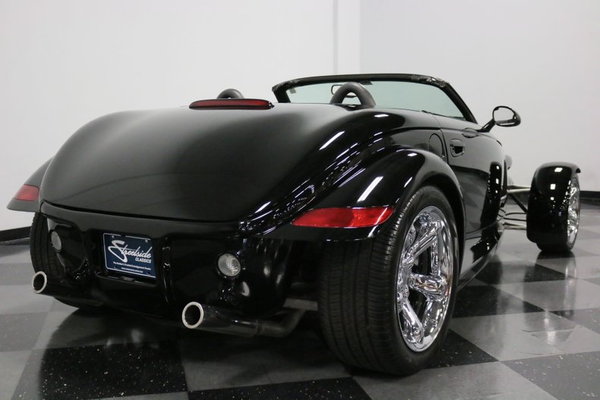 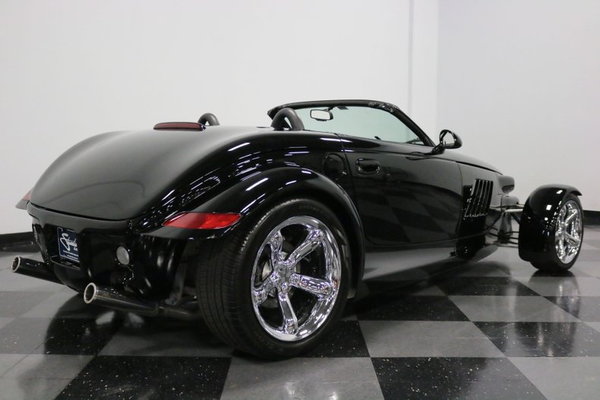 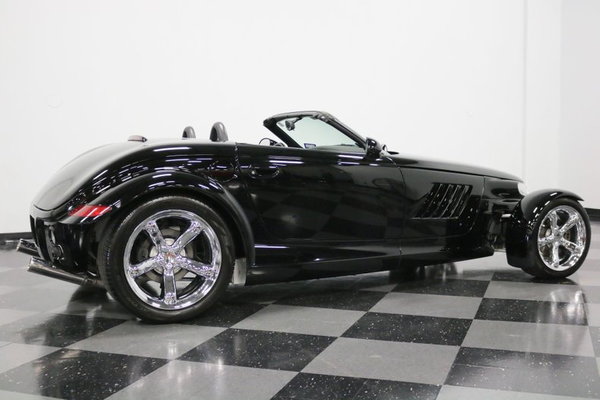 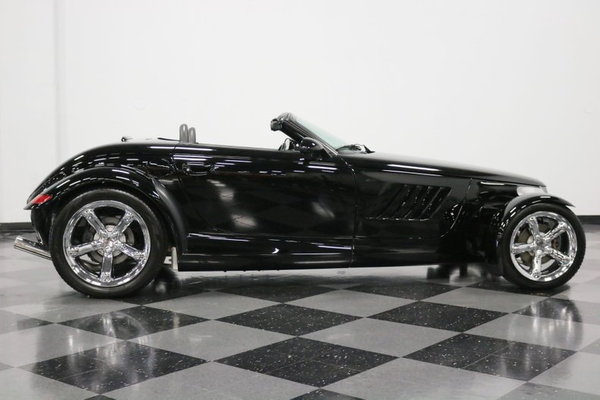 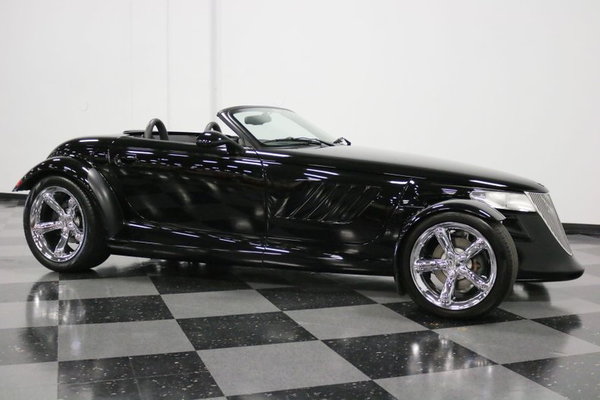 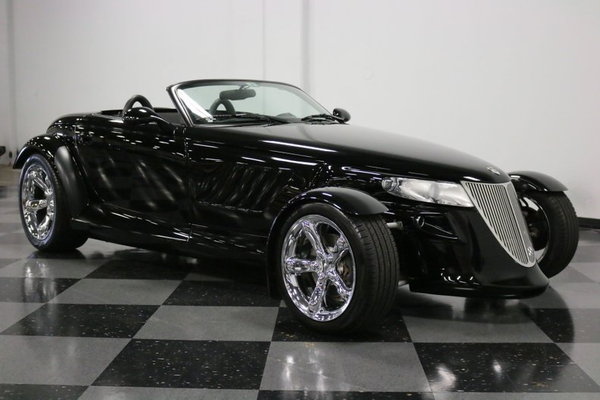 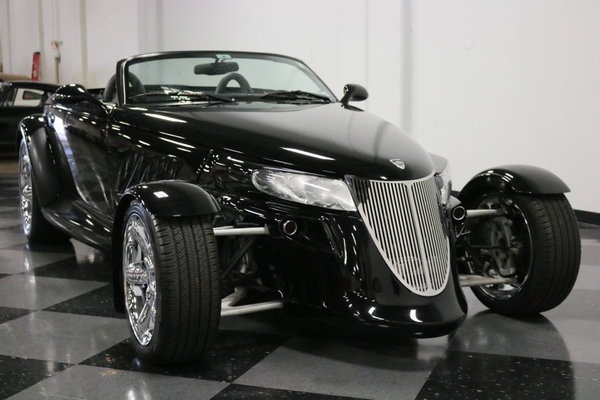 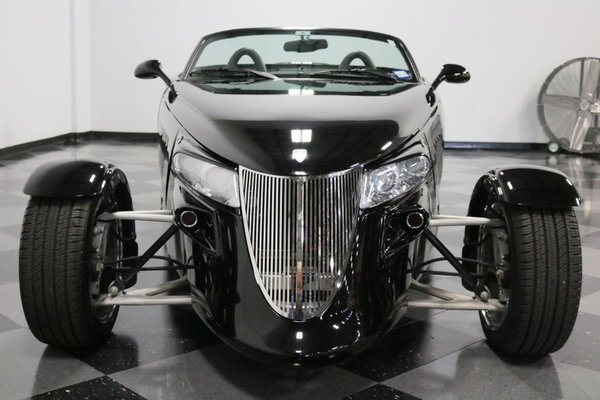 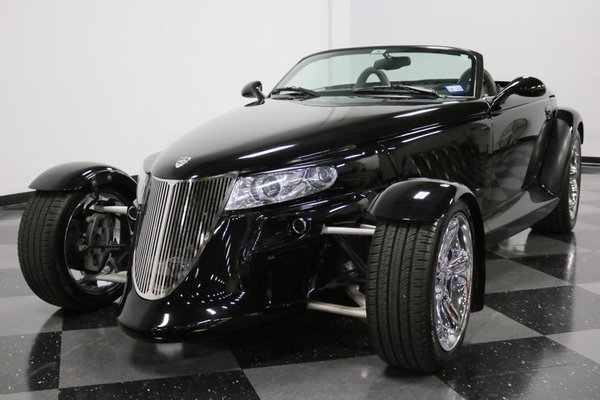 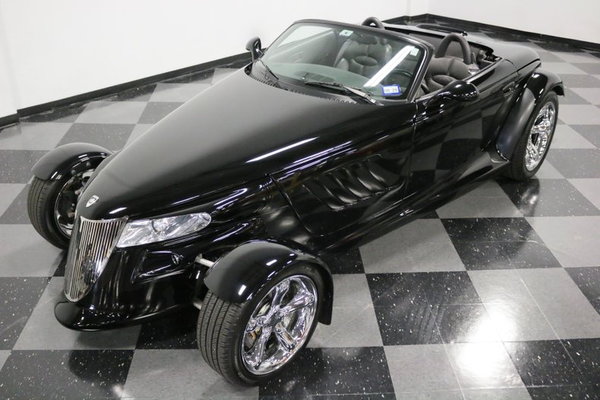 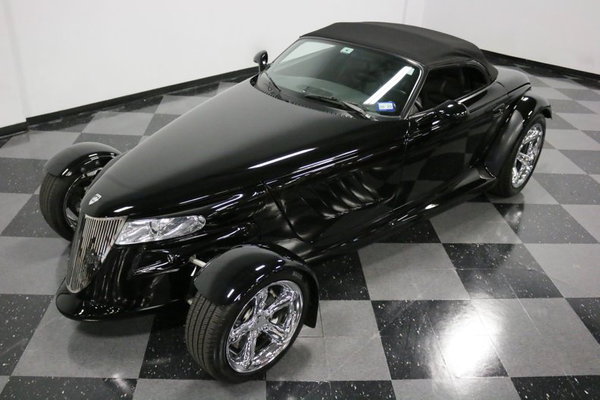 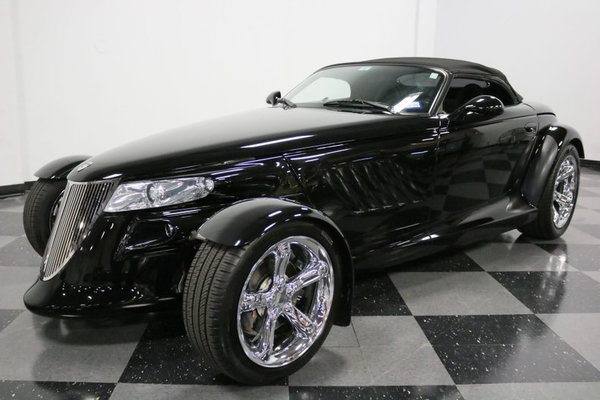 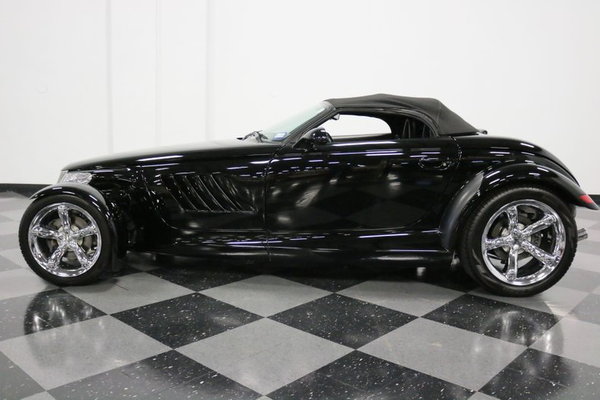 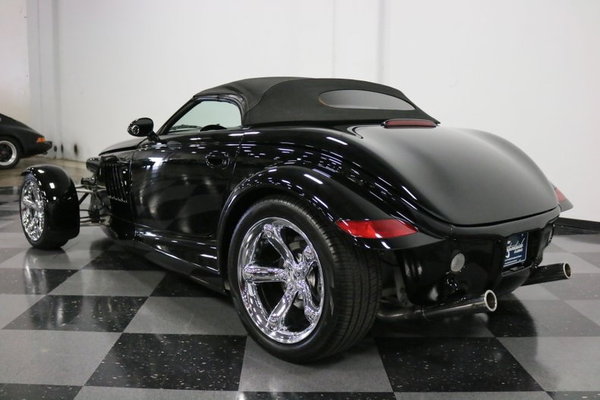 Remember when car companies were taking chances and exploring new markets? The results were cars like the Viper, the Ford GT, and perhaps the most wild real-world dream car ever built, the Plymouth Prowler. This black-on-black 1999 Prowler shows just 33k original miles, making it for all intents and purposes, a car that's barely been broken in.

Finished in sinister black paint with a black leather interior, this is the look you wanted in a Prowler. It's channeling the great hot rods of the past with its rakish looks and dramatically staggered rolling stock, the hot rod reinvented. If you're a real car guy, I don't have to tell you about the Prowler's influences or the homage that it represents. Instead, think about what it represented to Chrysler Corporation. Its real name was the Prowler AIV, which meant Aluminum Intensive Vehicle, and they used this low-production specialty car to learn about how to build aluminum components that are still in use today. The fact that it also looks cool was simply a nice side effect. As a low-mileage car, the highest praise we can give it is that it's pretty much like new in every way. That means no scuffs on the chin, no parking lot dings in its aluminum skin, and no chips on the rockers where the big tires threw up some gravel. Aside from the deleted bumperettes and the addition of that killer stainless grille up front, and the dual exhaust tips in the rear, it's all-stock and all the previous owners have spent plenty of time keeping it clean, waxed, and maintained. Perfect it is not, and the front fenders were repainted at one point in the past (they look great and match the body), but this is certainly a dialed-in Prowler that you can show off with great pride.

The stylish black leather has a great look in the Prowler, recalling the heavy-duty hides used on vintage rods and even motorcycles. Of course, everything was standard in Plymouth's flagship, from A/C and power windows to keyless entry and a massive sound system that fills the cabin with tunes, top up or top down. Retro styling cues include the column-mounted tach and center-mounted instrument panel that has a color-matched bezel that was especially dramatic on light colored Prowlers. And to kick things up a notch, the previous owner installed a new Pioneer head unit that now controls the media inside the cabin. The idea is that this is an OEM hot rod with everything fully engineered and fully functional, and it just works. Airbags, seatbelts, and all the bells and whistles truly make the Prowler a no-compromises hot rod. There's even a snug-fitting convertible top with glass rear window and defroster that stashes below the rear deck for a truly sleek look. With those giant rear tires, there's not a lot of trunk space but does it really matter when the car looks this good?

Chrysler's corporate 3.5 liter 24-valve V6 with 253 horsepower is a snug fit in the pointed engine bay, but given the car's lightweight structure, it delivers entertaining performance. Packed in there are all the bells and whistles plus fuel injection and distributorless ignition, so it always stars and runs, and fuel economy is impressive if you stay out of the loud pedal. The 4-speed automatic transmission was the first installation of Chrysler's "Auto Stick" setup, which allows manual shifting on the fly, and the all-independent suspension soaks up bumps better than any buggy spring setup ever could. Four-wheel discs with ABS are confidence-inspiring. Chrome-plated factory alloys and staggered Pirelli tires show almost no use and are a must for preservation classes in the future.

A very cool car that has become an icon in its own time, the Prowler is a great tribute to the past and a smart investment for the future. Call today!
View Full Description