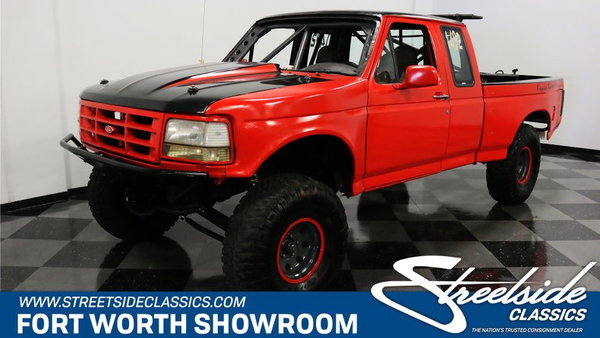 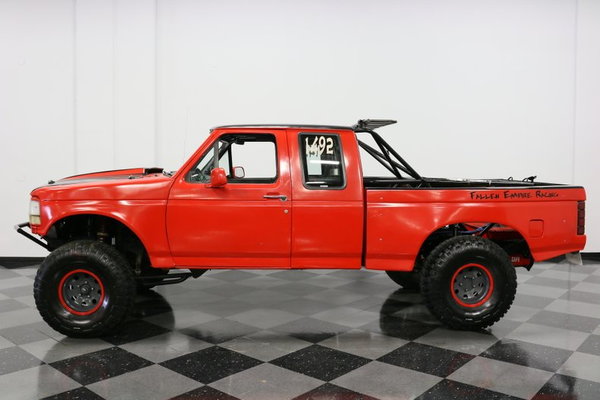 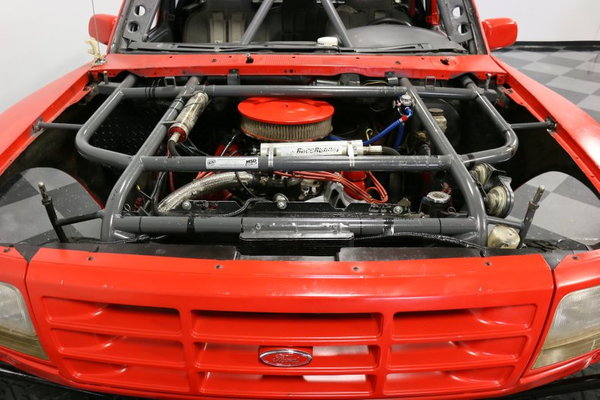 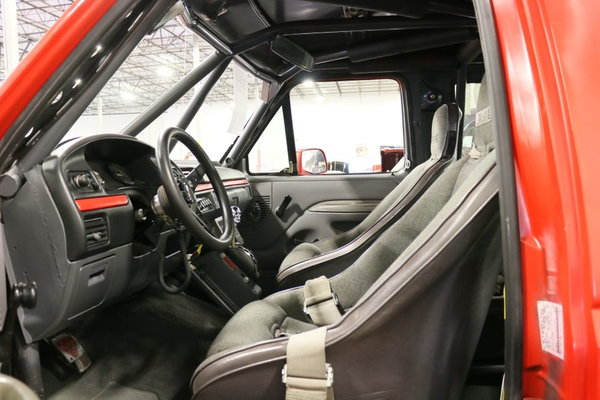 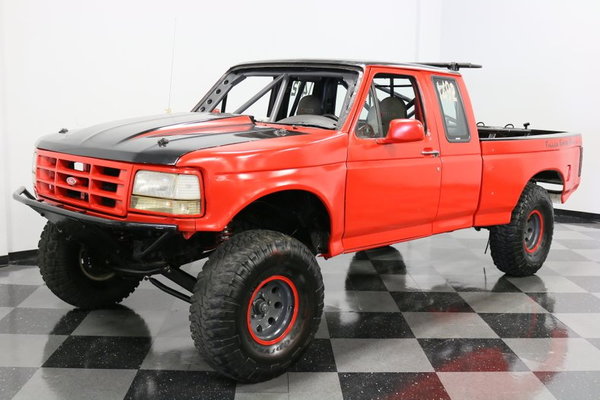 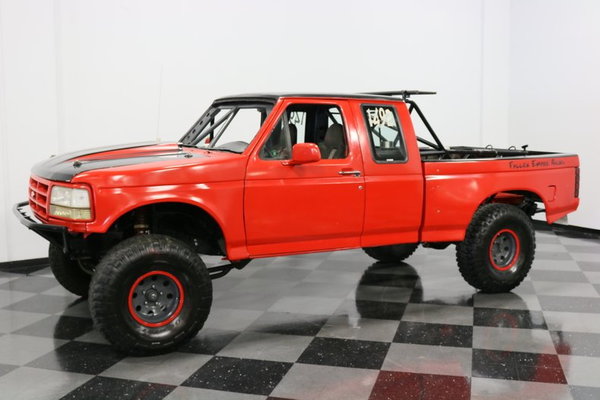 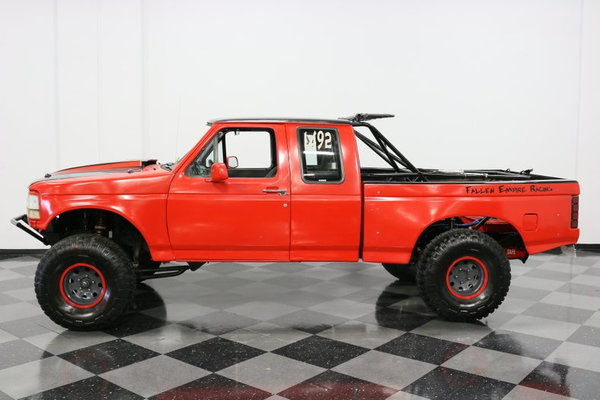 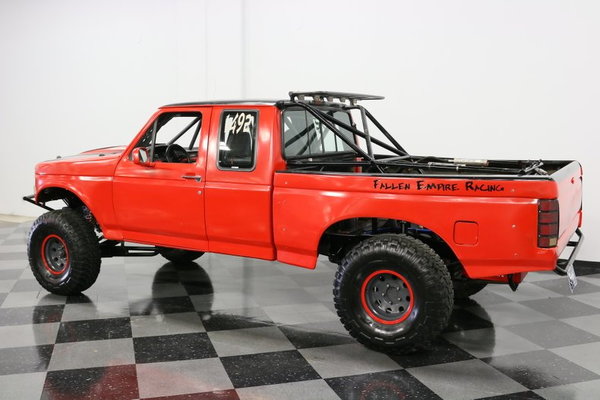 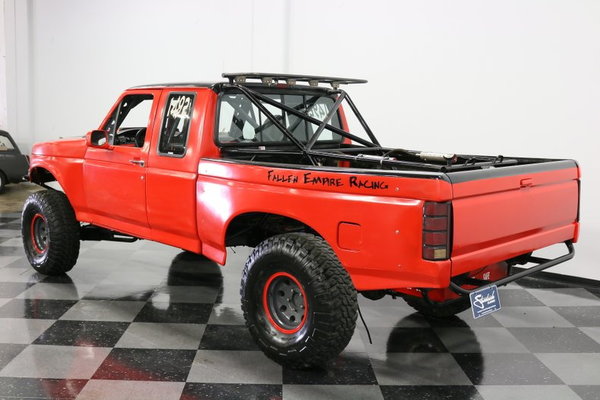 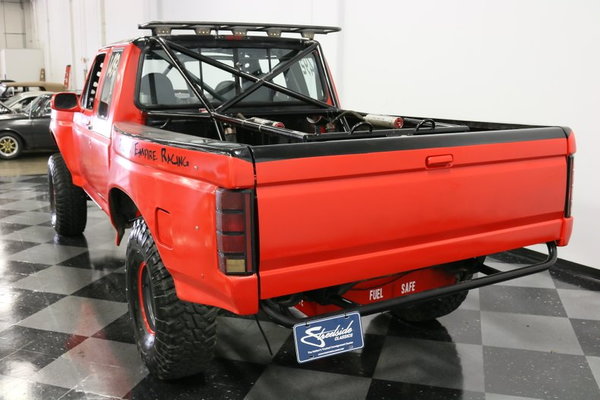 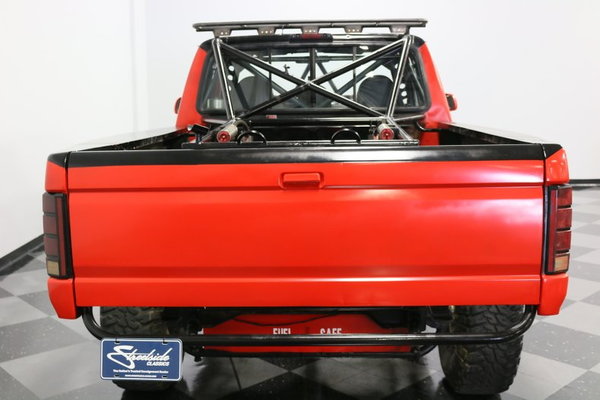 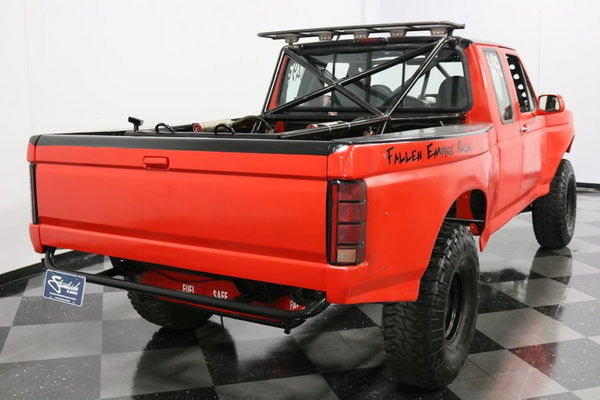 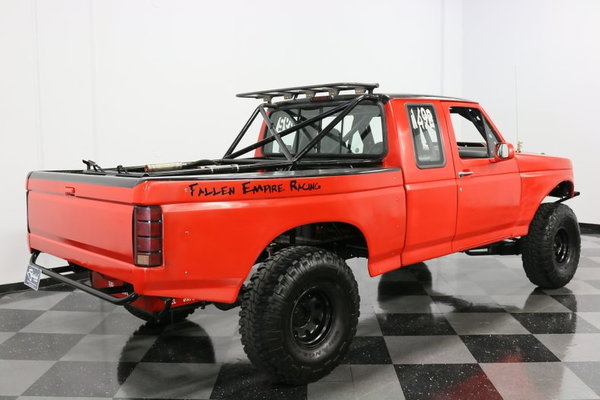 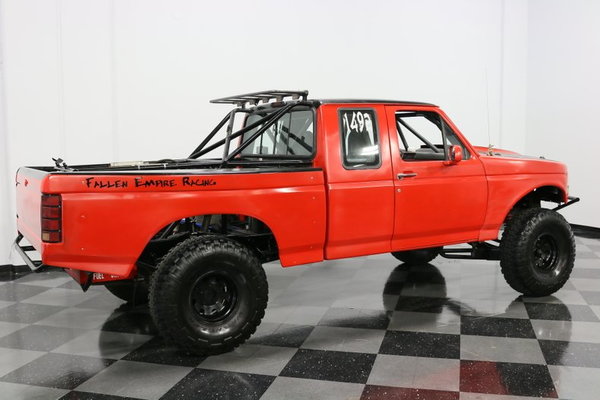 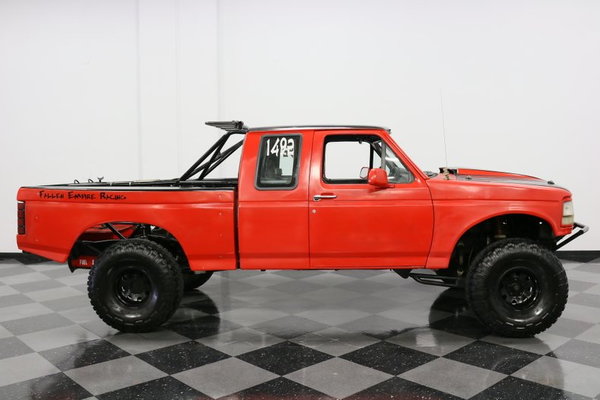 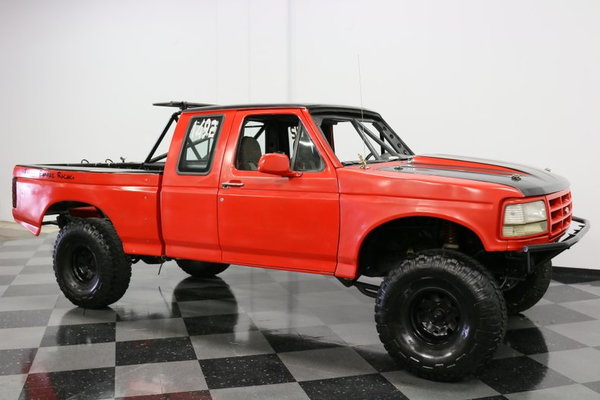 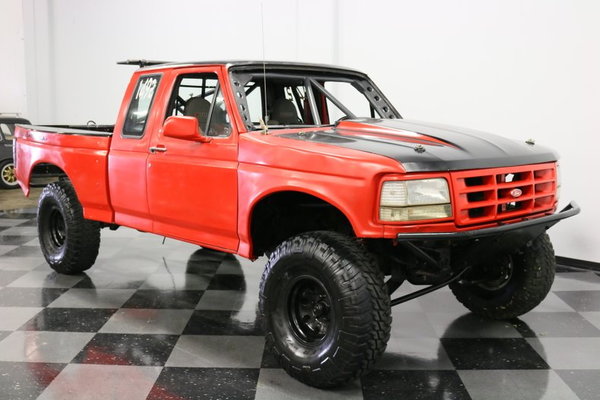 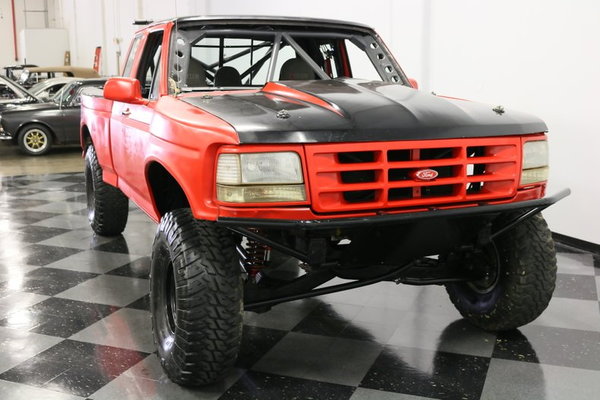 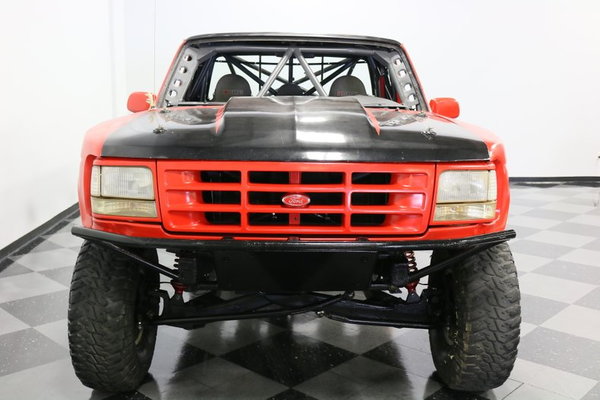 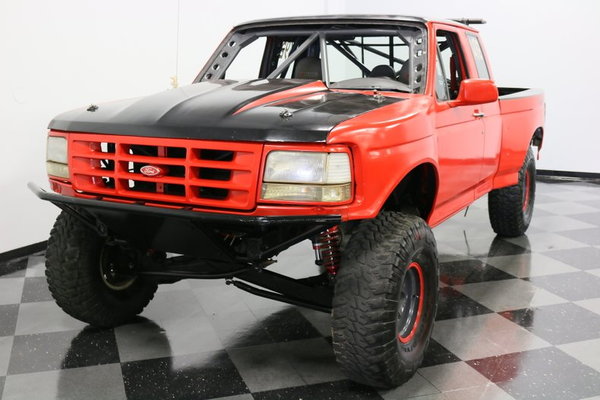 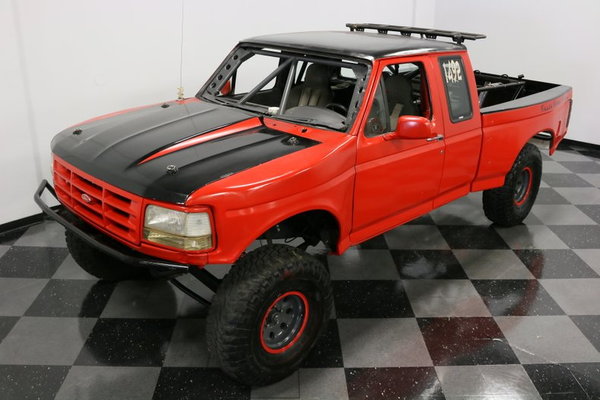 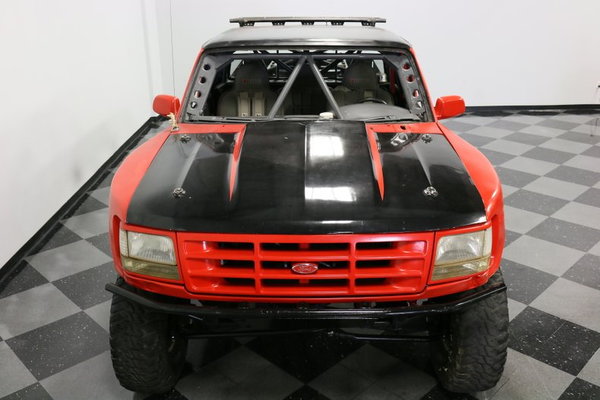 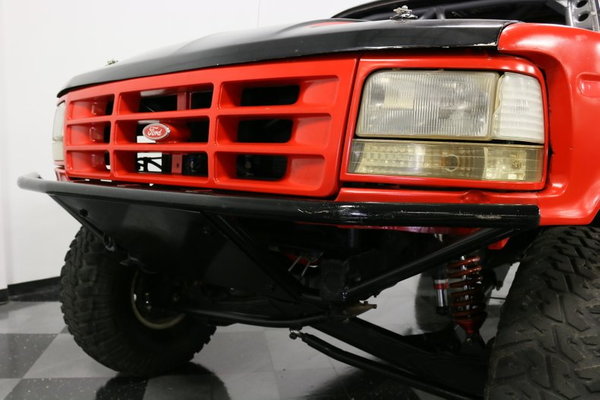 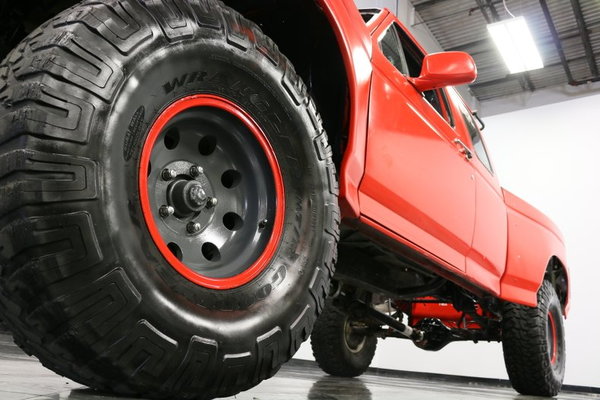 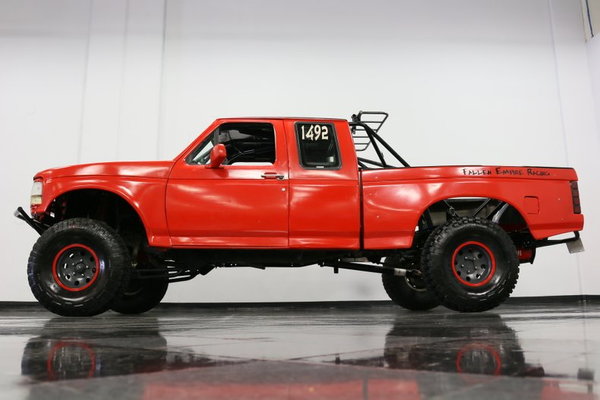 Sure, it looks like an F-150. Heck, it even has a familiar Ford power-train. But this 1995 Ford F150 Pre-Runner is anything but your daddy's weekend hobby truck. Instead, it's a full-blown Baja race truck that was built to conquer the desert, and just about anything else that stands in its way. Still curious? Well, take a closer look, because these unique pieces of machinery don't come up for sale very often.


The optics aren't too deceiving, this truck was not built for quick runs to the local Home Depot (although it could certainly handle that). Instead, it's been professionally altered to blast through sand dunes, most notably by utilizing its custom suspension and giant lift on top of oversized tires. The body has been augmented for desert racing as well, with bulging Hanneman front and back fiberglass fenders, a fully connected exterior-to-cab-to-bed roll cage, and a lift-off Glassworks fiberglass hood that all work in concert to reduce weight while stiffening the body. The cab, doors, and tailgate are still Ford steel, and remarkably still function like they did when this truck was just a regular F-150. The paint is what you'd expect out of a truck with a few years of competitive racing (2004-2006 to be exact) under its belt, a single stage application this is not going to win any beauty contests. But that's not the point of this rig, and who in their right mind would paint up a trailer queen just to get it stuck in coarse sand? It's still fairly presentable, but the finish isn't what grabs attention, it's the expensive racing add-ons and rumble from underneath the hood that brings the crowds.


Race-spec equipment is found inside the cab of this Pre-Runner too, and that's a good thing because the support from that gear is essential for both driver and passengers when this baby is hopping around the desert. First thing you'll notice is that even though the cab is reinforced with a six-point roll cage, it's fairly unobtrusive in this full-size truck. One can easily slip into any one of the three Beard suspension racing seats and strap on the accompanying five-point harness. The windshield is gone, the dash has been modified to accompany new switch panels, and the Artcar gated shifter that controls the C6 auto is elevated for an easier grip for the driver. Despite its rough-and-tumble design, the cab is actually quite comfortable, and still features factory door panels, plush carpets, and even has the added conveniences of an aftermarket AM/FM/CD player and Lawrence Baja GPS unit.


You can't make it through the desert without power, and this truck has plenty to spare thanks to the Ford big block 460 cubic-inch V8 that lives under the hood. Nestled neatly underneath part of the roll cage, it's topped by an Edelbrock aluminum intake and Edelbrock 650CFM 4-barrel carburetor. And since it's prone to spend a lot of time working hard in hot weather, dual electric cooling fans attached to a large radiator are present to keep the temperature at bay. That powerful motor turns a recently rebuilt (approx. 500 miles ago) C6 automatic transmission that spins a heavy-duty gusseted Currie 9" POSI rear-end featuring 4.56 gears. Yeah, it can drive up a mountain if you want it to. Remarkably, the frame is still original, although it's been boxed for proper reinforcement. The suspension work is extensive, highlighted by I-beams and radius arms from Camberg Engineering along with Sway-A-Way coilovers up front, and Deaver long-travel lift springs and Sway-A-Way reservoir shocks and in the rear. The entire fuel system was rebuilt in 2017, and the racing fuel cell located in the bed has a 32-gallon capacity that can keep this truck supplied over vast racing distances. The look is completed with blacked-out wheels wrapped in humongous 37x12.5x15 Goodyear MTRs.


This real-deal Mojave Desert tested Pre-Runner is a terrain-devouring beast with signs of professional workmanship everywhere you look. With an asking price that's only a mere fraction of the build cost, this Ford is a great way to get into, or continue dominating, the hobby of Baja racing. Call today!