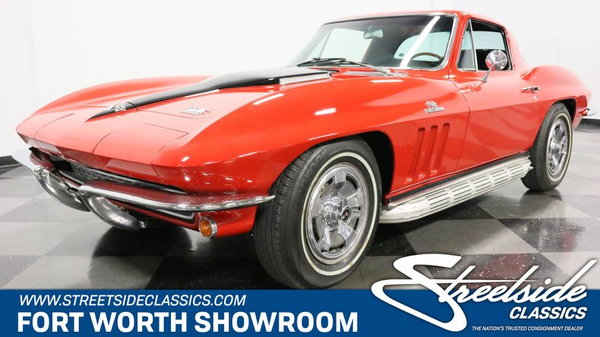 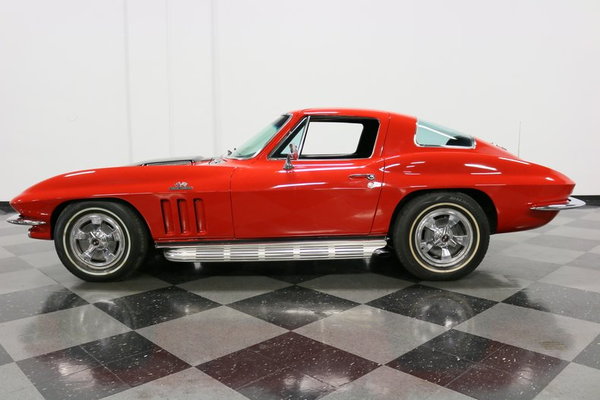 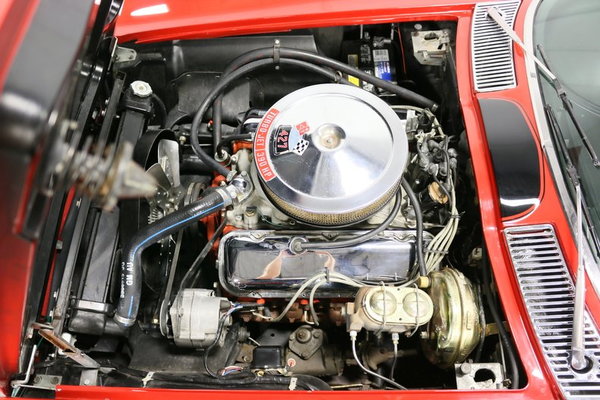 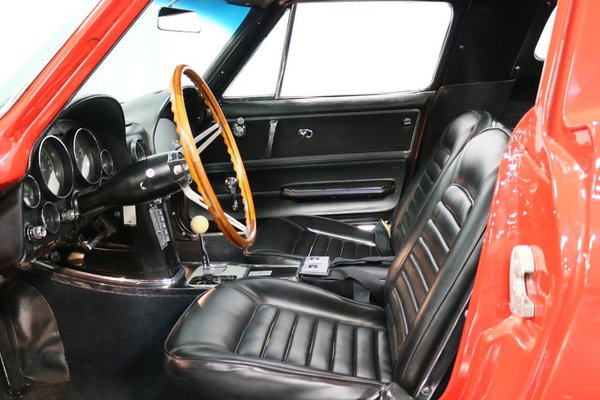 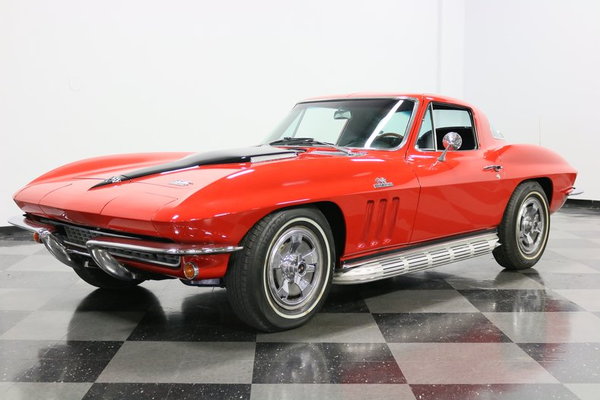 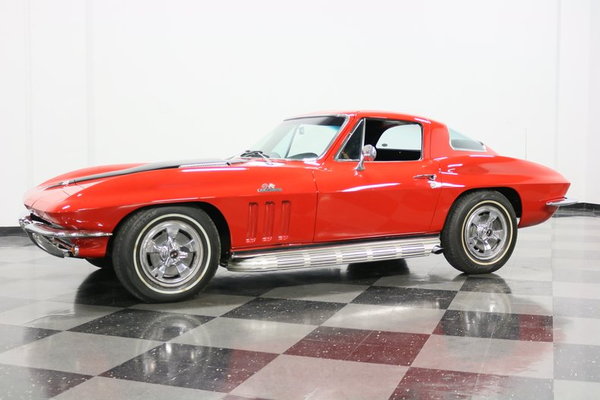 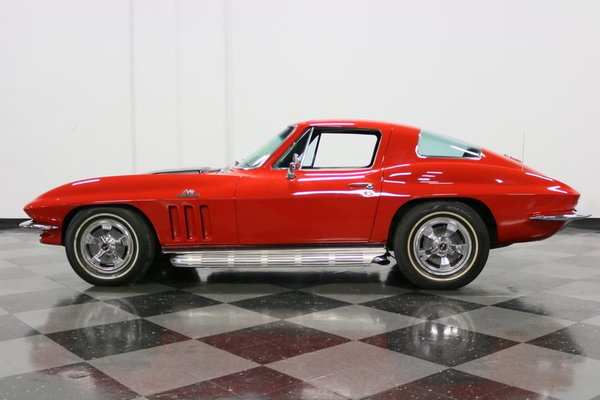 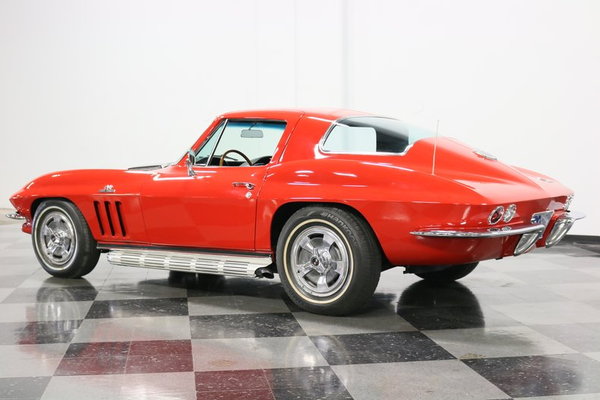 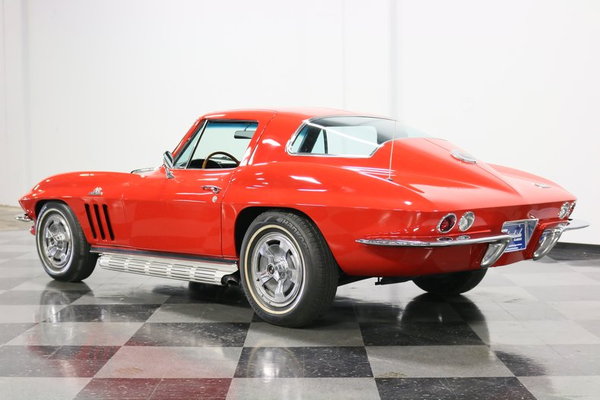 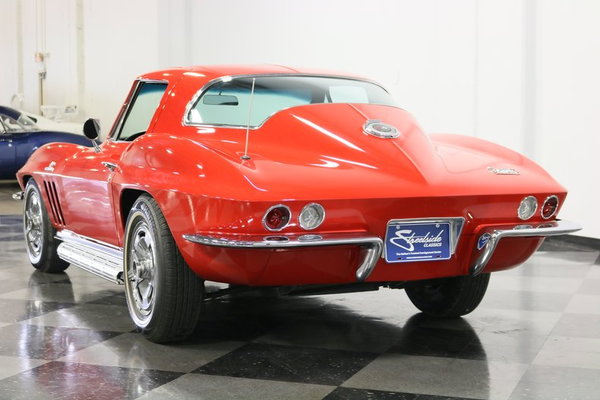 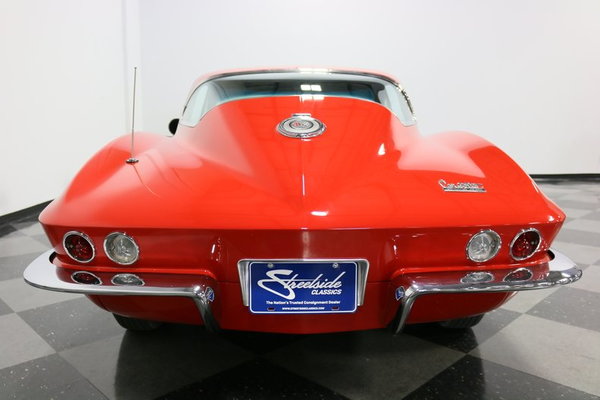 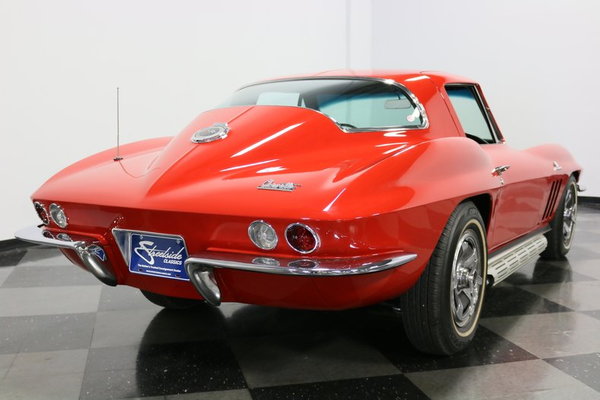 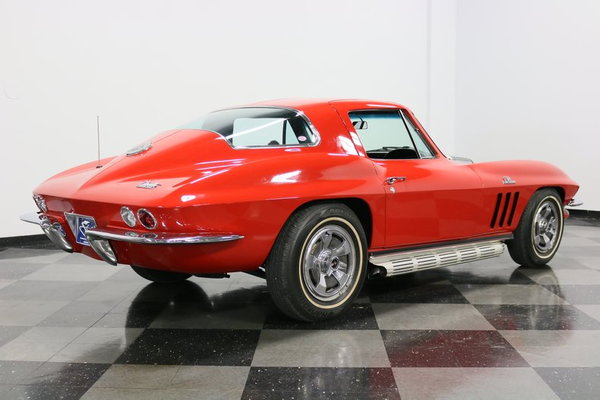 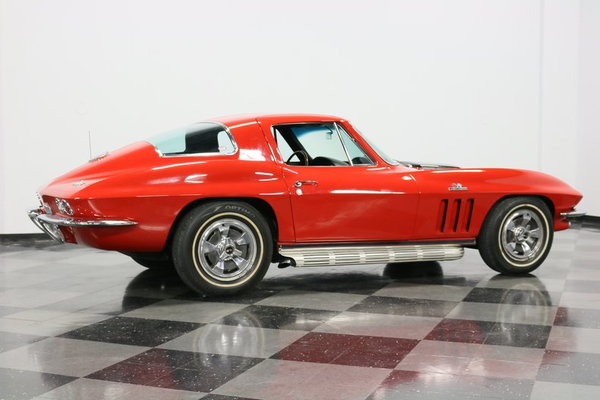 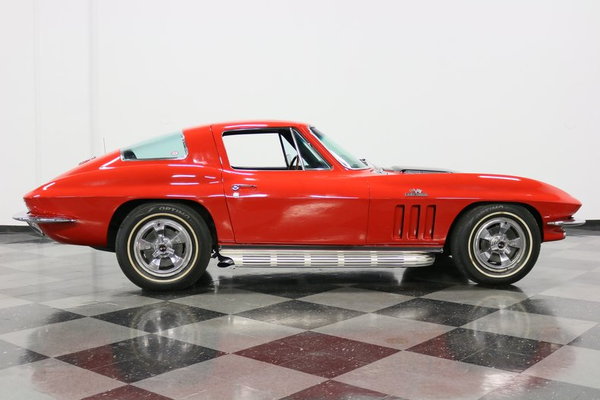 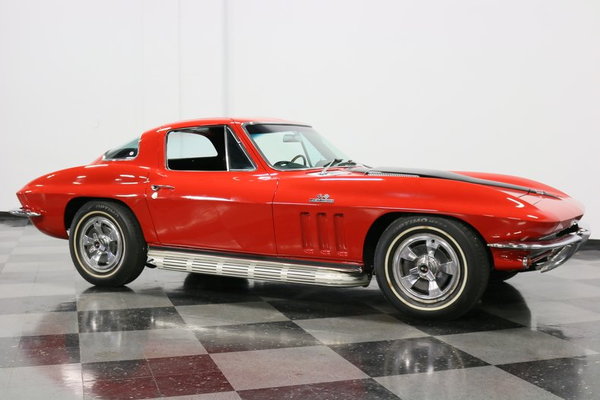 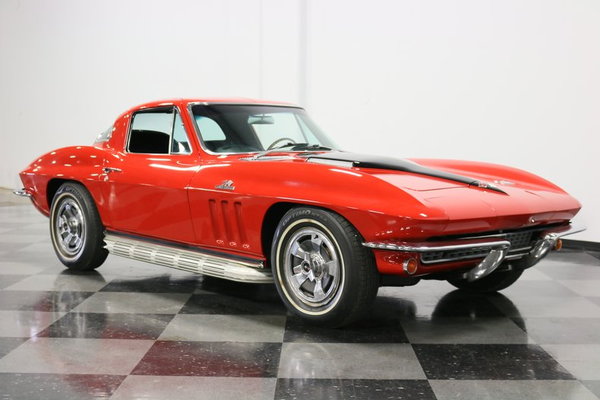 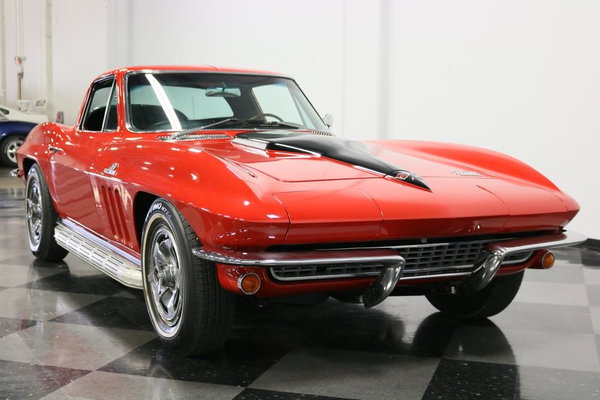 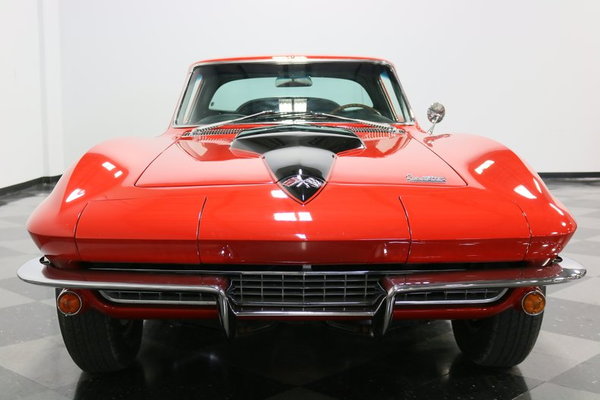 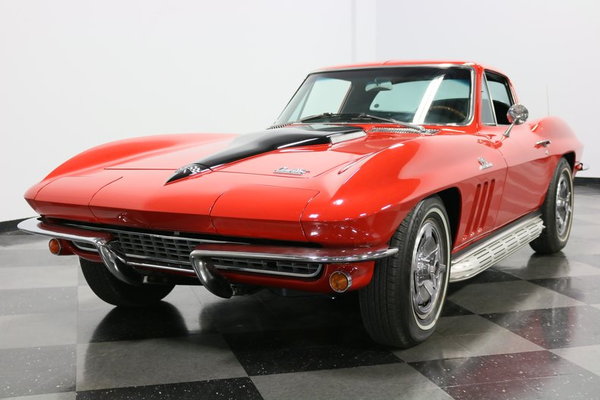 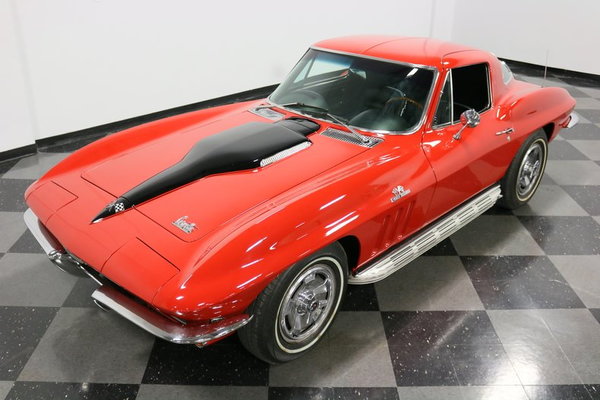 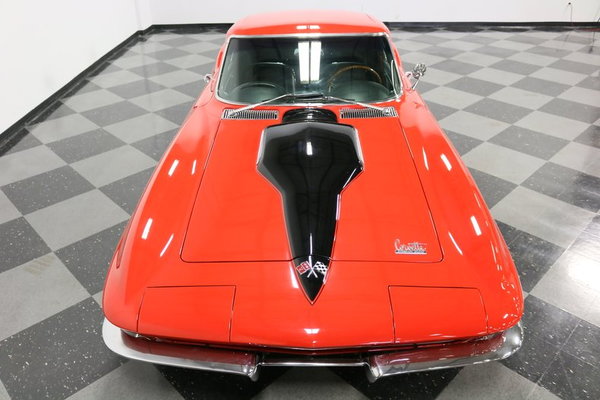 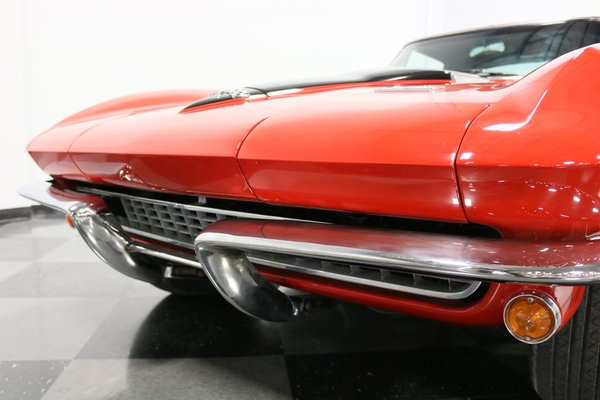 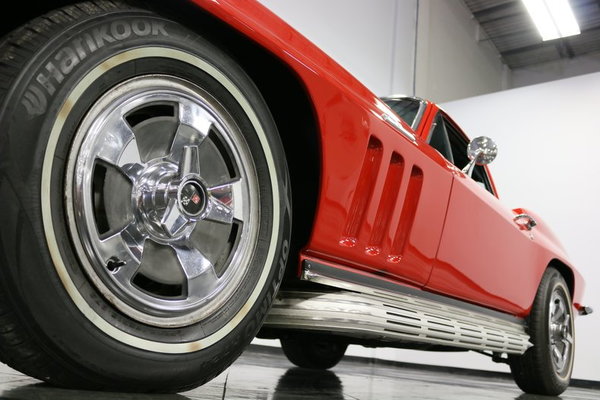 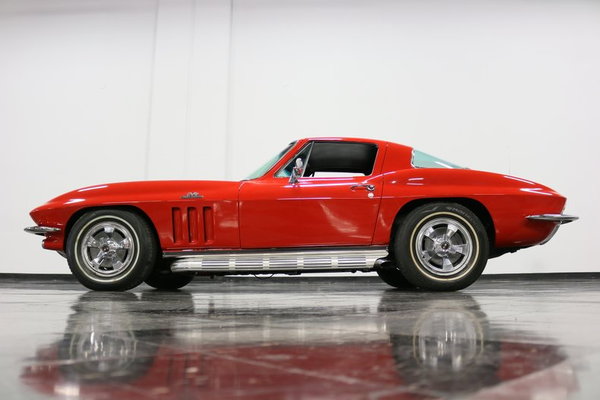 $77,995 Get Financing
Business Seller - Streetside Classics-Dallas/Fort Worth
Fort Worth, TX

From its scooped, contrasting hood to its stylish sidepipes and on back to its diamond-tapered rear end, this 1966 Chevrolet Corvette 427 is an example of the model at its artfully restored, big block vintage best. Its sheer power makes it a blast to drive, while its outstanding appearance would no doubt make some serious impact on the local car show circuit.

As a second generation 'Vette, this '66 gets its sterling good looks from a couple of inspirations - including one concept car created by heralded Chevy designer Bill Mitchell geared toward factory racing, as well as the better known Mako Shark that wowed audiences at car expos all over the world. Originally code 986 Silver Pearl, the Rally Red paint now draped over the exterior sure grabs everyone's attention and is in very strong condition, with even pigmentation and deep reflection. Step up to the front and you can fully appreciate how the black "stinger" contrasts with the sea of red it's surrounded by. Hidden headlights were a defining feature on the Corvettes of this era and the pair here are nicely aligned and raise into position with no issues. A sloping, tapered rear roofline gave the model a futuristic look unlike any other car of its era.

Chevy prided itself on equipping its prized model with inspiring, stylish interiors and, as you'll see upon climbing inside, they really hit the mark here. Just in front of the woodgrain steering wheel, the dash area is a definite focal point, with its dual cove configuration housing a complete assortment of functional gauges on one side and a sharp looking, badged chrome accent on the other. The low-backed bucket seats inside show only very light use and retain plenty of padding for comfort while on the road as they straddle a very clean looking center console that puts the shifter within easy reach. On both sides, the door panels still fit firmly against their steel frames and feature hardware that looks to be in very strong condition. If being surrounded while behind the wheel by an ultra-sharp, vintage driving environment is a priority for you, then this 'Vette would be pretty hard to beat.

Under that stinger hood lies a 427 cubic inch V8 in all its wondrous glory. The IL suffix code denotes this as having 390hp and while that and the rear casting number of 3869942 are all correct for this car, the VIN stamp is no longer visible on the stamp pad to make it absolutely definitive - presumably from a prior rebuild in its past. To elevate its output even further, it now carries a couple upgrades including a Weiand intake as well as a Holley 4-barrel carb just below its air cleaner bearing those instantly recognizable Chevy flags. The big block sends a nice deep rumble out the side pipes - authoritative but not too overbearing - and pairs with a 4-speed manual transmission which has a great solid feel when going through the gears. The engine compartment is well-detailed, with fresh-looking hoses, properly routed wires and an overall very clean appearance. Power disc brakes bring this true American sports car to prompt, low-effort stops, and the undercarriage would be considered very solid for any classic, let alone one that is more than a half-century old.

This 1966 Chevrolet Corvette is one of the most coveted classics of its generation and it features a reassuringly strong, road ready condition that's sure to bring a smile to your face for many miles to come. Call today!
View Full Description